M+H Properties Group has acquired two Ontario shopping plazas from Crombie Real Estate Investment Trust (CRR-UN-T) in what it considers to be a critical year where it will take a big leap forward. 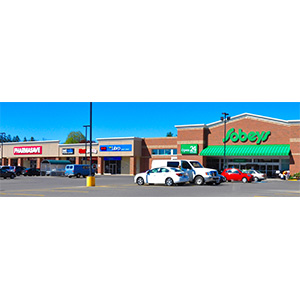 “We’re starting to take a look at more portfolios,” said Brad McDonald, a managing partner in the commercial real estate investment company along with Don Hughes and Jean Deschenes.

“We’re going to continue to speak with Crombie about some divestitures and see where that’s going to take us. We’re hoping that we can grab ahold of a couple of other assets that they may want to sell.”

M+H acquired Whitehorse Plaza in Simcoe for $15 million. It opened in 1970 and has 93,996 square feet of leasable area and 315 parking spaces. It has 14 stores and services, anchored by a Sobeys as well as a Dollarama and Pharmasave.

“These two plazas very much typify the kinds of projects M+H is seeking: well-established, grocery-anchored retail centres in community and regional growth markets,” said McDonald. “Both include a high percentage of triple-A national and/or regional retailers.

“They provide stable and consistent returns and both projects have value-add potential for increasing income and asset value through leasing strategies and possible new development.”

Sears Canada had a 4,141-square-foot appliance store that recently became vacant at Perth Mews that M+H is considering options for, including medical applications. It’s also working with the local municipality to solidify a site plan for a new pad of approximately 7,000 square feet that McDonald said has interest from several national retailers.

Whitehorse Plaza is 85 per cent occupied and McDonald said M+H has launched “a very aggressive leasing strategy” to fill the vacancies. There’s also a potential opportunity to build a small pad on the north side of the Sobeys parking lot further down the road.

McDonald described the existing leases at both plazas as “fairly decent.”

Burlington, Ont.-based M+H launched in 2009 and has an Ontario portfolio that also includes: Loyalist Plaza in Amherstview; Rideau Town Centre in Kingston; a Starsky Fine Foods on Queenston Road in Hamilton; and a 16,750-square-foot office building on Raymond Street in Ottawa.

M+H acquired Rideau Town Centre in late 2016 and plans to develop 2.5 acres adjacent to the existing plaza in early 2019, with a focus on bringing in hardware and other services. The company is in the final planning stages of developing a Tim Hortons with a long-term lease in Loyalist Plaza.

“Our long-term goal is to create a multi-million-dollar portfolio with the intent of transforming to a private REIT,” said McDonald. “We’ve been fortunate to get early and continued support from a particular segment of the investment community based on our experience and expertise, as well as our early results, and that has put us well on our way to our stated goal.”

While McDonald isn’t sure if M+H will become a private REIT this year, he’s confident it will happen within the next 24 months.

M+H’s executive team members have been involved in smaller regional growth markets in Ontario for years, and grocery-anchored malls with good tenancies in those towns and cities will remain the company’s primary focus.

M+H is also looking at opportunities further east, however. And since RioCan REIT (REI-UN-T) is selling smaller retail properties in secondary and tertiary markets, McDonald is hopeful that M+H may be able to acquire some of those.