Microsoft Research Montreal will relocate its state-of-the-art lab and office to a new facility being developed by Canderel and Claridge at Mile-Ex, the city’s new artificial intelligence hub. 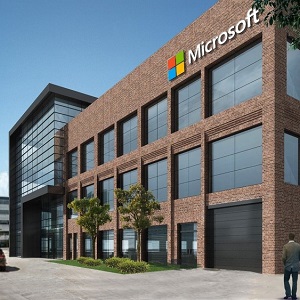 The facility, at 6795 Marconi, is expected to open in the fall of 2019. The current Microsoft lab is located just off the McGill University campus along du Maisonnneuve Blvd.

Microsoft made the announcement Wednesday. It is the second major announcement for the tech giant in the past two weeks, coming on the heels of a multi-pronged announcement which includes moving Microsoft Canada’s head office from suburban Mississauga to the new CIBC Square in downtown Toronto (see Microsoft moving Canadian HQ to Toronto’s CIBC Square).

“The fundamental principle in designing this project was to be at the forefront of creating a new office environment in one of Montreal’s most vibrant neighbourhoods,” said Eric Cordon, associate, development for Canderel, in Wednesday’s release.

“The relocation of Microsoft Research to 6795 Marconi confirms the project’s significance as the pre-eminent office complex in the global hub for artificial intelligence research, Montreal’s Mile-Ex.”

The new space will triple Microsoft Research’s physical footprint in Montreal. Occupying 31,610 square feet, the lab will comprise the entire fourth floor, and a large portion of the third floor. Additionally, the lab will have exclusive access to a fourth-floor, roof-top terrace.

“Canderel and our partner, Claridge, are thrilled to welcome Microsoft Research as the anchor and lead tenant at 6795 Marconi,” said Bradley Birks, vice-president, leasing, Canderel, in the release. “We feel privileged to be associated with a company as prominent as Microsoft and look forward to working closely together to create a unique research facility for their team.”

6795 Marconi has been redeveloped from a manufacturing facility which was first occupied by a meat packing company, then a pizza-making firm. It was built in 1986 and acquired by Canderel and Claridge in March of this year.

Demolition work on the existing building began almost immediately, Cordon told RENX. The redeveloped structure will contain 110,000 square feet of leasable space, standing three storeys on the east side and four storeys on the west.

The Canderel website currently contains listings for just two vacancies in the building, both for just under 11,000 square feet of ground-floor space.

“The property is 50 per cent pre-leased with several groups currently vying for the remaining space,” Cordon told RENX.

“Unique” ceiling heights of up to 21 feet

It contains what Canderel calls “unique” ceiling heights of 12 to 21 feet.

As part of what Microsoft called a “two-pronged real estate strategy for Montreal, Microsoft’s sales office will remain in the downtown central business district.

“With the support of the world-class local talent, our growth has outpaced our expectations.”

Since Microsoft purchased and renamed the former Maluuba lab in 2017, its research has focused on teaching machines to read, think and communicate like humans.

The lab has been steadily building its presence in Montreal, one of the bases of Canada’s AI research corridor, and Microsoft says this announcement reinforces its plans to continue to grow its research and engineering teams in the city.

The 6795 Marconi site is steps away from the new Montreal Institute for Learning Algorithms (MILA) and other AI research labs in the community.

Founded in 1987 by Charles Bronfman, Claridge is an investment firm headquartered in Montreal.

It represents the interests of the Stephen Bronfman family. In addition to its real estate investment platform, Claridge also invests in growing companies in the food, technologies, energy and entertainment industries.

Editor’s Note: This story was updated soon after publication with additional details provided by Canderel about the building, and the leasing status.