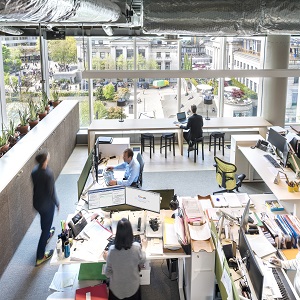 The space at the Cadillac Fairview-owned Pacific Centre is designed with interior office pavilions with modular workstations with options for raised desks for staff, customizable meeting rooms, a café, balcony and a large, landscaped atrium.

Miller Thomson is a national business law firm with more than 525 lawyers working in 12 offices across Canada.

For law firms such as Miller Thomson, gone are the days of broad oak desks hunkered in massive corner office suites guarded by receptionists. Instead, firms are opting for open spaces that promote technology, interaction and mobility, said Mike Walker, Miller Thomson’s managing director for B.C.

“They don’t feel like the disappearance of the corner office and the big oak desk is a big deal.

“They don’t mind at all. They’re really happy to have an outdoor atrium that we have in this space, or the ability to pick up and work in different places at different times.”

The building at 725 Granville Street, redeveloped in 2014, is also home to Nordstrom, Microsoft and Sony Pictures Imageworks. The property is part of a wave of new office projects — including the new TELUS Garden, Manulife’s new 16-storey office at 980 Howe and others — that are starting to pull Vancouver’s white-collar core south of Georgia Street.

The 48,000-square-foot Miller Thomson space includes floor-to-ceiling perimeter glass with views of the Vancouver Art Gallery pavilion. Work stations are aligned sporadically in the open without cubicles, with desks and without.

“We are redefining how legal solutions are formulated and accessed,” Walker said. “We will be offering educational programs, hosting round tables, and seeking new ways to work with our clients. We want clients to impact our thinking on a daily basis, while we in turn impact theirs.”

The move comes as downtown Vancouver approaches an office vacancy rate of about five per cent, despite the introduction of several new office tower projects over the past 24-30 months.

But with a three-year lead time, Miller Thomson didn’t feel much competition for the space, Walker said. The firm knew its lease was to expire at the former space at 840 Howe, located within two blocks of the new space.

“We considered staying in it, and knew that we needed to modernize,” Walker said. “If you’re going to do all that construction, it’s actually simpler to build and move only once instead of moving out, building and then moving back in.”

Pacific Centre wasn’t initially a must-have space, he said. “The first time we looked at Pacific Centre we rejected it. We came back months later not having found any space that really excited our people and we said ‘let’s have another look.’ ”

The firm came around to the idea of having one broad floorplate with everyone on the same floor, in a space that could be designed to its exact tastes and needs.

“We started doing some planning on it and our people started getting excited about the possibilities,” he said.

“We are excited about the possibilities that this new approach in Vancouver opens up,” said Kent Davidson, chair of Miller Thomson. “This is just one step we will be taking to make legal solutions more accessible to our clients and communities in which we live and work.”

The space holds about 145 staff and could expand to accommodate 165 in the current configuration.

“We had the advantage of having a lot of lead time,” Walker said. “We got started early. We spent a long time on locating the space and we spent a very long time getting the design right.”