Minto Communities will launch sales for two downtown Toronto condominiums this month as it focuse... 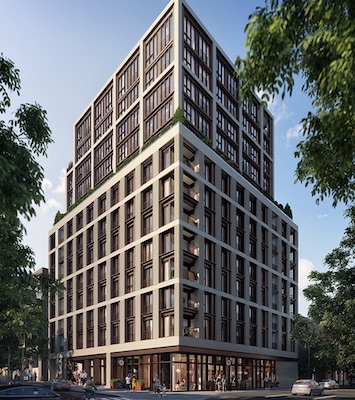 123 Portland is one of two condo projects for which Minto Communities is about to launch sales in downtown Toronto. (Courtesy Minto)

Minto Communities will launch sales for two downtown Toronto condominiums this month as it focuses significant resources on a major pipeline of development projects in the city.

“We’re in the business of finding opportunities,” Minto Communities division president David Robins told RENX. “As long as we think we have well-located properties that are extremely well-designed and are priced for the market and offer value at that price point, we’re confident.”

Minto has about 20 active low-, mid- and high-rise residential projects at various stages across the Greater Toronto Area. The two most recent launches, as well as two buildings scheduled for completion during the coming months, are all towers.

Robins said some of Minto’s low-rise projects are farther out in the pipeline, perhaps five years away from construction.

“We have other existing properties that we own downtown that we’ve bought over the past few years that aren’t fully entitled and we continue to work through that process,” said Robins.

Minto’s bullishness on the downtown condo market is proven with its two latest projects, one on the western part of Adelaide Street and the other further east near the same thoroughfare.

The intimate 123 Portland will be built on the site of a former Para Paints store and three two-storey attached townhouses at 502 Adelaide St. W. and 119, 121 and 123 Portland St.

Minto bought the site from an ownership group that included Sweeny&Co Architects, which had proposed a residential development on the property.

A couple of floors will also offer flex plans to accommodate suites larger than 2,000 square feet.

Amenities will include a rooftop terrace, a kitchen bar with a private dining area, a gym and a residents’ lounge.

The building, designed by Sweeny&Co and U31, will launch sales on Oct. 15.

The Saint, the name given to the condo tower to be built at 89 Church St. near Adelaide, will occupy the site of a parking lot and a building scheduled for demolition.

Cityzen and Greybrook Realty Partners were part of an ownership group that had proposed to build a high-rise rental tower on the site before Minto closed on its acquisition in July.

The Wallman Architects-designed amenity spaces in the building will encompass 17,000 square feet, both inside and outside, with 10,000 dedicated to health and wellness.

It will include an infrared sauna, a soaking tub, a steam space and a meditation room featuring an illuminated wall made of salt rock.

Sales for The Saint will launch on Oct. 29. Prices haven’t yet been released for either project.

Both The Saint and 123 Portland will feature updated variable refrigerant flow building systems that reduce energy consumption while allowing air-conditioning and heating to operate year-round.

Under-counter garbage sorters will be installed in every kitchen and water purifiers will be offered as a standard feature.

Other Toronto developments by Minto

Minto has two other sold-out downtown Toronto high-rise condos in the final stages of completion.

Minto Westside is comprised of Wallman Architects-designed 18- and 20-storey buildings with 660 units at Bathurst and Front Streets. Occupancy has begun and should be complete by the end of the year.

Minto Yorkville Park, a co-development with North Drive, rises 25 storeys from a two-storey retail podium at the corner of Bellair and Cumberland Streets. Occupancy should start in late January and finish in the spring.

Minto Apartment REIT (MI-UN-T) was spun off in July 2018 and began trading on the Toronto Stock Exchange. With each site acquisition, an evaluation is made on whether a condo or purpose-built rental is the most appropriate type of building to develop.

“That decision is driven in part by the nature of the location, what we thinks fits best within the neighbourhood and, ultimately, the economics,” said Robins.

The Minto Group was established in 1955. It has a fully integrated real estate investment, development and management platform.

It has built more than 85,000 homes and manages 8,800 rental units while carrying more than 2.5 million square feet of commercial space.