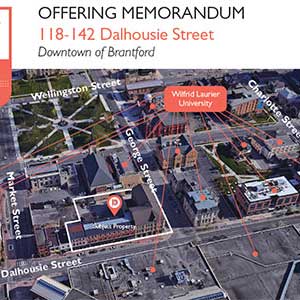 “The downtown core will be changing drastically in the next couple of years,” said Alex Brogantz, the company’s management valuation consultant for multi-residential properties.

Brantford has a population of approximately 135,000 and is located about an hour’s drive from Toronto and the Niagara Region.

The property at 118-142 Dalhousie St. is surrounded by academic and residence buildings, athletic facilities and retail space belonging to Laurier Brantford, a satellite campus of the Waterloo, Ont. university. Laurier Brantford had 39 students when it opened in 1999 and now has more than 3,000 while becoming one of the fastest-growing campuses in the province.

Property being offered for $4.2 million

The 23,626-square-foot property features 35 bachelor, one-, two- and three-bedroom rental apartments, 11 commercial units and 16 outside parking spaces. It was built between 1861 and 1881, renovated between 1997 and 2000, and is owned by an unnamed private family from Toronto that has put it on the market for $4.2 million.

The three-storey building has a capitalization rate of 6.96 per cent.

Commercial tenants include H&R Block, Money Mart, a restaurant, a computer store, a hair salon, a barber shop and a convenience store.

Four commercial units and two apartments are vacant. The apartments are renting for significantly lower than market rates, which Brogantz partially attributes to bad management and neglect in recent years.

“The manager that the current owner had for a long time wasn’t sophisticated enough and was from outside of the city,” Brogantz said. “They recently switched back to GK York, which are local guys. Hopefully that will help them improve the situation, but that just happened about two weeks ago so it’s too recent to see any change.”

Brogantz thinks the best purchaser would be an experienced property owner and manager willing to invest in improvements and attract higher quality tenants.

Brogantz said the interiors of some units are more in need of work than others. One exterior corner of the property has a heritage designation and must be preserved.

“We expect someone will take this building and turn it around and make it like a brand new rental with good ideas and good commercial tenants,” said Brogantz. “You need to find good management and make sure you have capital to do some work, and you can build a good asset for the long term.”