Monit Investment is now the sole owner of downtown Montreal’s Scotia Tower after paying $79 million to acquire Scotiabank’s 50-per cent share of the property’s land and 27-storey tower. 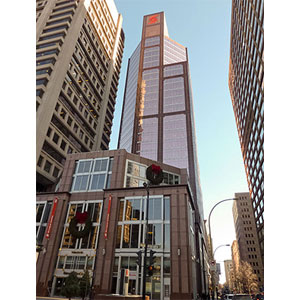 “Our real estate growth strategy is to own 100 per cent of our investment properties and continually improve them,” said Monit president Barry Kotler. “We would consider joint ventures for development projects.”

Monit was founded 65 years ago by Alex Kotler, Barry’s father, who remains chairman of the board. The privately owned company owns, manages, develops and redevelops a full spectrum of real estate and has established a portfolio of more than 200 million square feet of land and millions of square feet of office, industrial and commercial space in Canada and the United States.

Monit has owned half of Scotia Tower since it opened at 1002 Sherbrooke St. W. in 1990. It will continue to manage it, as it does all of its commercial properties. Scotiabank will remain the building’s principal tenant.

Monit also owns the adjoining 1000 Sherbrooke West, which shares facilities with Scotia Tower, including a large underground parking garage, retail concourse and connections to Montreal’s underground pedestrian and transportation network. Both of them have received TOBY awards from the Building Owners and Managers Association in the past in recognition of their overall appearance, maintenance and social impact.

The 1000 Sherbrooke West property is home to Monit’s head office as well as the Centre Mont-Royal multimedia conference and special events centre that includes a state-of-the-art theatre and several conference rooms which can accommodate from 10 to 800 people.

Monit’s interest in Montreal urban renewal was shown in its redevelopment and interior and exterior transformations of the three-tower, 750,000-square-foot Place Crémazie in the north end and the 205,000-square-foot Guy Tower.

Monit’s industrial properties in Quebec are located in Montreal’s garment district and business parks. The company also has an inventory of retail premises throughout Montreal.

Kotler said that Monit isn’t considering expanding its Canadian office, industrial and retail portfolio beyond the dozen properties it owns in Montreal.

Monit properties outside of Montreal

“We are currently in Quebec, Texas and Pennsylvania. In the past we were also in Ontario, New York, Nebraska and Florida.”

The Pennsylvania property is a three-building, 126,330-square-foot shopping centre in Bloomsburg. Monit owns six distribution facilities and one multi-use industrial complex in Texas.

Monit’s roots are in residential development and thousands of homes have been built as part of its projects. It has become one of Quebec’s largest private land owners and is heavily involved in creating planned communities. Its Val-des-Brises undertaking in Laval will eventually see the completion of a 2,000-home community on 20 million square feet of land.

Kotler said Monit is in discussions for other potential acquisitions, and that there are several developments and redevelopments planned, but he couldn’t elaborate on any of them at this point.