Four years after it was first announced, construction has begun on Groupe Montoni’s $450-million-... 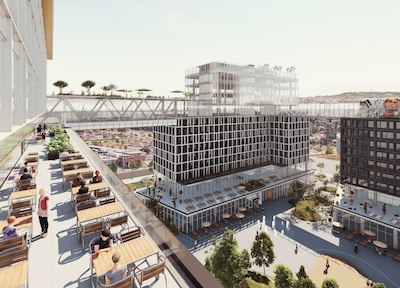 An artist’s rendering of the Espace Montmorency project in the Montreal-area city of Laval. (Courtesy Groupe Montoni)

Four years after it was first announced, construction has begun on Groupe Montoni’s $450-million-plus Espace Montmorency project, the largest ever mixed-used development in Laval.

Slated for completion in 2022, the project includes 1.3 million square feet of leasable space in four towers. It aims to be the centrepiece of a new downtown for Laval, the city just north of the island of Montreal.

Espace Montmorency was first announced in 2015, but “when we started, the market was not quite ready,” said Dario Montoni, president of Groupe Montoni. “We sort of learned as we went. When we first started, we had this grandeur idea but we didn’t quite have the proper mix.”

The project has since been rethought and now has the right elements for today’s market, he said.

In its initial plans, the project was conceived as having four phases, with about 10 buildings of up to 20 storeys and more than one million square feet of leasable space. Claridge was originally scheduled to be an investor, but has since stepped away.

Groupe Sélection will develop Espace Montmorency’s residential portion, which will be comprised of three types of living spaces.

Fridöm, targeting people aged 55 and over, will include 200 boutique apartments at a monthly “all-inclusive” price. REZ, which is aimed at young households, professionals and families, will have 300 rental units, and Yimby will consist of 200 units for millennials.

Groupe Sélection has projects on the go across North America, but “our roots are here,” said Réal Bouclin, founding president and CEO of Groupe Sélection, of the decision to move its office to Espace Montmorency.

A hotel partner has been chosen, but the name has not yet been announced, Montoni said. Announcements about the hotel and some of the retail brands will be made during the next few months. 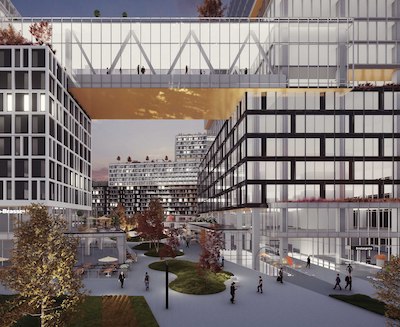 A night perspective of the Espace Montmorency development in the Greater Montreal city of Laval. (Courtesy Groupe Montoni)

Montoni says part of the retail mix, including restaurants and cafés, will target the 18,000 students who pass by the site daily. That number is projected to increase to 21,000 by the time construction of Espace Montmorency ends.

The project is aiming for LEED Gold, LEED ND and WELL certifications.

“Everything is being thought about for sustainability,” said Montoni, noting Groupe Montoni has had a sustainability department since 2006.

For example, energy will be transferred in a loop system that will take into account the fact the project’s residential component is mostly occupied at night, while the office component is primarily occupied during the day.

“We’re talking about being easily 50 per cent more efficient than a standard building,” Montoni predicted.

Ice rink will loop around perimeter

Among Espace Montmorency’s public elements is an ice rink in winter that will loop around the perimeter of the project’s green spaces.

“We’re not just creating community for people to work and to live, but also for the Lavallois to come and to be part of this centre,” Montoni said.

Laval Mayor Marc Demers said Espace Montmorency is a major element in the development of downtown Laval and “represents the direction in which Laval wants to develop.”

The Fonds immobilier de solidarité FTQ invests in profitable and socially responsible real estate projects. As of the end of 2018, it had 52 projects worth $3.4 billion in progress, 69 properties under management, 1.5 million square feet of land for development and $82 million allocated to affordable, social and community housing.

Groupe Sélection has more than 50 housing complexes either in operation, construction or development in Canada and the U.S. and assets of more than $4 billion.