The Montreal Olympic Stadium Tower is getting a new lease on life – literally – with new commercial office space inside the inclined structure being leased for the first time. 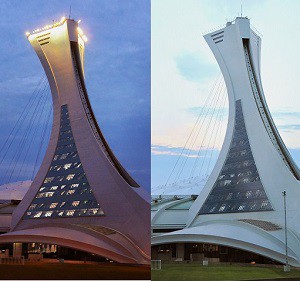 Day and night views of the Montreal Olympic Stadium tower as it will appear when it has been renovated to create about 180,000 square feet of office space. (Images courtesy ROI)

It’s the first time space inside the tower is being used for any purpose since it was completed in 1987, 11 years after the 1976 Olympic Games. (Only the base of the tower was completed for the Olympics.)

About 180,000 square feet of office space is being developed in the tower. About 80 per cent of that space has been leased to Desjardins for the financial institution’s call centre operations.

“For 30 years, there was nothing in the tower,” says Cédric Essiminy, public relations spokesman for the Regie des installations olympiques (RIO), the Quebec government agency that operates the Olympic Park. “When I say nothing, I mean nothing. There was no plumbing; there was no electricity, no fibre optics.”

Olympic Stadium architect Roger Taillibert foresaw the tower would house offices and training facilities for amateur sports federations. The idea was not realized but in 2014, the Quebec sports institute, the Institut national du sport du Quebec, made its home in the bottom of the tower.

Over the years, about 15 projects have been proposed for the tower interior – from hotels to ventures that would charge visitors admission. None of them made it to fruition.

But in 2016, the RIO was contacted by an Avison Young broker who said he had an unnamed client – which turned out to be Desjardins – interested in renting the tower interior.

Desjardins signed a 15-year deal, which is renewable, to lease about 150,000 square feet in the bottom seven storeys of the tower. More than 1,000 call centre employees will occupy the tower next year.

“As a bank, they’re a very good tenant,” Essiminy says. “For us, it’s a really big deal. It’s a new chapter in the history of the park.”

Lease rates are comparable to those of downtown office towers, he adds. ”We did not give away the space.”

Essiminy notes the tower, which inclines to 45 degrees, “is quite unique in the world.” In addition, employees in the office space will have access to the Olympic Stadium’s interior parking, two Metro stations and 11 bus lines, Bixi shared bicycle stands, a sports centre and a park.

Attempts are being made to lease the remaining 20 per cent (about 30,000 square feet) to small companies or start-ups in the top five storeys of the 12-storey structure, which have less leasable space as the tower has a triangular shape.

To prepare the tower for office tenants, the structure is undergoing its first renovation since 1987. The $143.5-million project includes a revamp of the exterior of the tower, with the original concrete panels and windows being replaced with floor-to-ceiling windows. Light from the offices will afford passersby views of the interior of the tower.

The renovations have required the installation of the tallest crane in Canada.

To finance the renovations, $100 million is coming from the RIO’s maintenance and repair budget for the exterior of the tower, while a government loan of $43.5 million is paying for construction of the office space. The loan will be repaid from rental payments from office tenants.

Desjardins will be handed the keys to its office space in the fall and the financial institution will then decide where everything from the employee cafeteria to washrooms will go.

Essiminy says plans call for the funicular, which transports about 200,000 visitors annually to the top of the tower, to be refurbished in the next five years.  Changes will also likely be coming to the observatory and exhibition space atop the tower.

“There are so many scenarios on the table,” he says, including a variation of CN Tower’s EdgeWalk, which allows people to walk along the ledge.

Meanwhile, a decision as to whether the Olympic Stadium – known by many Montrealers as the Big Owe – will get a new roof is expected in the fall.

The second version of the roof was installed in 1998. But the fibreglass membrane roof has been beset with hundreds of tears annually and use of the stadium is restricted in the winter. The cost for a new roof could easily surpass $200 million.

Essiminy said a group of asylum seekers, primarily from Haiti, who are currently being housed in the Olympic Stadium can be accommodated there until Sept. 18.

At that point, they will have been moved to other locations by the Canadian government to make way for the Artistic Gymnastics World Championships. The stadium has a current capacity of 900 beds, which are being used at between 70 to 90 per cent of capacity.