An area of east-end Montreal that once housed a major Canadian Pacific Railway repair shop will soon be home to a green neighbourhood and an additional $250 million worth of development. 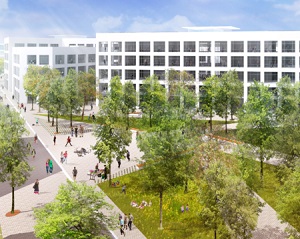 About 25 per cent of the site will be green and public spaces, including a tree-lined pedestrian street, urban maple forest, public squares and greenbelts.

“Our intention is to become a worldwide reference in urban renewal,” says Christian Yaccarini, president and CEO of the Société de développement Angus, the developer of the Angus site.

He described the project in the east-end Rosemont-La Petite-Patrie neighbourhood of Montreal during a forum Friday on major projects in the city, organized by the Montreal Board of Trade.

It’s the second phase of the Technopôle Angus, located in what for more than 100 years served as the CPR locomotive repair shops. Angus Shops was once home to more than 10,000 employees, but closed in 1992.

The urban renewal of the site began in 1999. Technopôle Angus has now developed 735,000 square feet of commercial and residential real estate and is home to 62 companies, employing 2,700 workers in 13 buildings.

In the planning stages since 2013, the mixed-use project was approved by the City of Montreal in February despite criticism from nearby residents about its density and building heights. Under the plan, buildings will have a maximum of six storeys and maximum heights of 65 feet.

The project will kick off with $40 million worth of green infrastructure work in the spring, with $20.5 million in funding coming from the Quebec government and the balance funded by the Société du patrimoine Angus.

Speaking at the Board of Trade event, Quebec municipal affairs minister Martin Coiteux said the funding could make the neighbourhood a model of energy efficiency.

Aside from remediation of contaminated soil, the infrastructure work will include an innovative green runoff management system for rainwater. The system is designed to store and filter 95 per cent of rainwater and reduce the consumption of drinkable water used in building facilities by 40 per cent.

Construction to start in September

Construction will break ground in September on affordable residential units and a mixed-use office and retail building. The project is designed to achieve Leed-ND V4 platinum certification.

Most of the 360 housing units will be affordably priced and will contain three or four bedrooms. “What we’re aiming for is really families,” to live on the site, Yaccarini says. The goal is to attract and retain families in the heart of Montreal.

Phase II of Technopôle Angus aims to provide office space for 1,500 employees and commercial space for some 20 new local businesses.

“The vision that’s being unveiled today will lend impetus to the renewal of Montreal’s east end,” Yaccarini says.