Montreal’s Le Nordelec, one of the largest brick and beam office buildings in North America, is for sale. 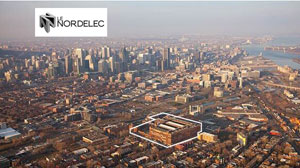 “The property is a unique landmark asset due to its high ceilings, loft-style spaces, natural light and many amenities, as well as the opportunity to enjoy collaboration with the residential component in the complex,” said Scott Speirs, vice-president of capital markets for Jones Lang Lasalle Real Estate Services Inc., the exclusive listing agent for the historic structure.

Le Nordelec includes about 790,000 square feet of office and retail space spread out over eight storeys that’s being sold based on a bidding process to take advantage of what Speirs called great market conditions.

“A very wide variety of investors are showing interest in the property: REITS, pension funds and private investors, both local and foreign.”

Live and work at Le Nordelec

The Le Nordelec property, owned and developed by ELAD Canada Inc., also houses a significant residential component with four condominium wings. New construction condominiums have been built and more are planned on the site.

“The company is committed to complete the existing and future phases of the successful Nordelec residential master-planned community,” said Speirs.

More than 2,300 people live and work at the property, which was built in several phases between 1913 and 1948 and was formerly the home of the Northern Electric Company Limited. That population is expected to grow significantly as the project expands.

Le Nordelec occupies about half a city block adjacent to the Lachine Canal and the rapidly developing and gentrifying Griffintown neighbourhood in the southwest part of Montreal, 10 minutes from the downtown core and close to public transportation.

The historically industrial area is transforming as properties are redeveloped as condos and industrial facilities are repositioned as loft office spaces. A variety of restaurants and boutiques have sprung up in the neighbourhood to serve the newly arriving young professionals.

Le Nordelec acts as a small business incubator with a focus on the technology and creative industries, including software, gaming, marketing, graphic design and architectural firms. It has attracted such tenants as Uber, GSoft, Softchoice, Interpublic Group, Yellow Media and Keywords Studios.

The office space is 70 per cent leased and has averaged 70,000 square feet of absorption in recent years. Speirs wouldn’t disclose rental rates, though older tenancies will roll over in the next five years and significant step-ups are built into leases.

“The company has invested a tremendous amount of money in order to restore and maintain its original façade while modernizing all of the building’s systems to allow for its current use, while bringing in quality tenants and improving common elements,” said Speirs.

Le Nordelec also offers 34,000 square feet of retail space with state-of-the-art loading docks at ground level. It fronts Saint-Patrick Street and has been designed to accommodate a grocery store as well as such complementary uses as dry-cleaning services, a coffee shop and restaurants that can be accessed from an internal concourse with seating.

Cacao 70 — a chocolate, sweets and brunch restaurant — has leased about 7,000 square feet. Speirs said the rest of the space is being actively marketed and is drawing plenty of interest.