A combination of factors ranging from less traffic congestion to cheaper leasing costs are making the South Shore of Montreal a strong candidate for commercial development. 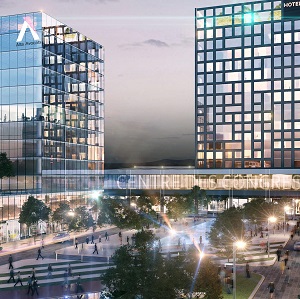 The South Shore is “at the foot of Montreal without the traffic nuisances,” says Luc Sicotte, president and CEO of Landmark Properties. He was speaking at a panel on South Shore growth and development on Oct. 12 at the Montreal Real Estate Strategy and Leasing Conference.

House prices are increasing at a slower pace on the South Shore than in Montreal, which gives people an incentive to stay longer off the island, adds Marco Fontaine, director of sales and marketing at developer Devimco. Fontaine, like most of the panelists, noted he is a long-time South Shore resident.

In addition, the South Shore has one of the lowest rates of unemployment in Quebec and one of the highest rates of household revenue, says Mario Verville, director of development for the City of Longueuil.

The building has gold LEED certification and is linked to the Longueuil-Université-de-Sherbrooke Metro station.

“It was easy to choose the South Shore for many reasons,” Saucier says, including lower acquisition costs, land costs and rents, and because many of its employees live there.

Built 50 years ago to accommodate three million passengers per year, the station now has 15 million annual users. The Metro runs under the St. Lawrence River and connects to downtown Montreal in 10 minutes.

Planned at the site are 350,000 square feet of residential space, a 250,000-square-foot office building and new parking under the Metro, all of which will be carried out while keeping the subway operational. The project aims to provide a metro station that will be viable for the next 50 years.

Redevelopment around the Metro station is part of Centreville 2035, a plan by Longueuil to build a major new downtown at the site that will combine the attributes of work, live and play.

Sicotte says the location is a TOD (Transit Oriented Development) in that it is also home to a South Shore bus terminal on which 1,400 buses converge daily.

Located at the northeast corner of the junction of Highways 10 and 30, it will include 2,600 housing units, 1.2 million square feet of commercial and office space and a 130,000 square foot park. As part of the first phase of the project, Marriott Courtyard will build a 184-room hotel and conference centre with four multi-function rooms with a capacity of more than 1,000.

Solar Uniquartier will be a TOD project as it will be home to a station of the future light-rail network, the REM (Réseau électrique métropolitain), which will link the South Shore to downtown Montreal via the new Champlain Bridge. The South Shore will have three REM stations.

Solar Uniquartier is being built next to the Quartier Dix30 “lifestyle centre.”  Yves-André Godon, executive vice-president, asset management of Carbonleo Real Estate, notes the project, which was built on 33 million square feet of land bought in 2004 for $7.5 million, is now worth $1 billion.

Major projects are in the offing as well in the South Shore communities of Candiac and Laprairie, he says.

However, Sicotte notes development of other areas on the South Shore will depend on the success of the Solar Uniquartier and downtown Longueuil projects.