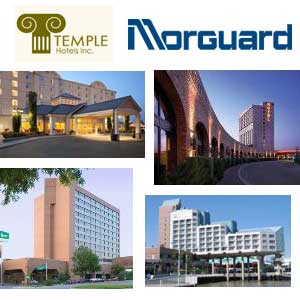 The takeover ends more than six months of maneuvering which saw the diversified real estate giant take an ever-increasing ownership stake in Winnipeg-based Temple and gain representation on the board and an asset management agreement and, in the end, take effective control with a 39 per cent stake.

Today, Morguard has control of Temple and its 29 hotels. What it doesn’t have is a clear idea what to do with the company.

“Our first focus is we are going to evaluate every asset and see what direction that we need to take,” said Rai Sahi, Morguard’s chairman and CEO, who also took on the role of CEO at Temple.

What to do about Alberta?

The big question mark with regards to Temple’s long-term viability, and the core source of the recent troubles at the company, is its large portfolio of properties in Alberta’s oil patch.

Temple’s debt load was manageable when Alberta was roaring along thanks to triple-digit oil prices, but proved a major burden when activity in the province cratered along with world oil prices.

“They were doing fine until the oil price dropped,”  said Sahi.

Temple has 13 Alberta hotels, including eight in Fort McMurray accounting for almost 900 hotel rooms in the centre of the province’s oilsands operations. It also has a trio of properties in Saskatchewan, another energy-dependent province.

Nine other hotels in portfolio

Morguard, a North American real estate and property management juggernaut with an owned and managed portfolio in excess of $19.5 billion, has already dipped its toe into the hotel sector.

In February, it closed on an agreement to acquire three hotels near Toronto’s Pearson International Airport for $33.5 million, excluding closing costs (the Courtyard by Marriott, Residence Inn by Marriott and the Hotel Carlingview Toronto Airport).

“We do have nine hotels which are not part of Temple,” which are all in the Toronto area.

Saw an opportunity in Temple

Morguard’s status changed from investor to principal player when the hotel company found itself the target of shareholder activism spurred by a falling share price.

“Somebody else had started a hostile change or something, and then I stepped in and tried to stabilize” things, Sahi told RENX last year after being named to the Temple board of directors.

“Now we will get a full detailed analysis of it and we will make some decisions,” he said this week.

“First of all, we need to find out how big is the exposure to Alberta and that part is tougher to figure out. Nobody can figure out how, when the oil prices will come back and then there will be a delayed reaction to the oil price (rise).”

Its immense size gives Morguard the opportunity to be patient with the Temple asset.

“In the scheme of things, it is not that material for Morguard. Morguard has maybe $45 million invested in Temple in the shares we have acquired in Temple. . . . We are bigger than that in the hotels we own directly.”

Sahi expects it will take 30 to 60 days before the company has a clear idea on Temple’s future, a process that will include discussions with an array of lenders.

Temple was controlled by Winnipeg-based investor Arni Thorsteinson, head of Lanesborough REIT (LRT.UN-T) and family-owned Shelter Canadian Properties Ltd. as well as CEO of Temple until this month.

“I suppose he knew a lot more than we did,” Sahi said of the management takeover that resulted in the departure of Temple’s longtime CEO. “So now we will find out.”