District Union, a $900-million multi-residential mega project in Terrebonne, near Montreal, has been launched by a subsidiary of retirement home developer Réseau Sélection. 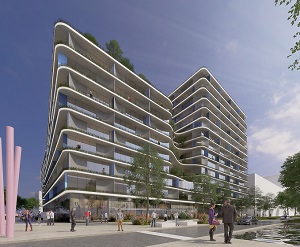 The multi-generational project will add 3,500 to 4,000 housing units aimed at people from all walks of life in its projected timeline of seven to 10 years.

To be built at the crossroads of Highways 40 and 640 and within walking distance of the Terrebonne train station, District Union will be a transit-oriented development (TOD). Terrebonne is about 30 kilometres northeast of downtown Montreal.

More than two million people live within a 30-minute radius of the city and the area has seen a 65 per cent increase in jobs over the last five years. In addition, 55 to 65 per cent of area residents live within 15 minutes of their jobs compared with only 35 per cent 15 years ago.

“We see it as a regional project,” that will draw mainly people from Laval and northeast Montreal, says  Isabelle Dessureault, senior vice-president and chief strategy and innovation officer at Réseau Sélection.

Construction of the first phase of District Union has already begun and delivery is scheduled for summer 2019. It will consist of 364 units: 80 condos and 284 rental.

Inspired by developments in places such as Portland, Ore., and Scandinavian countries, the project will consist of three types of high-density, multi-residential housing:

* Kubica is aimed at families, “but not the traditional families of the 1950s, with two parents and two kids,” says Dessureault, noting there has never before been so much household diversity. It will be composed of modular, segmented blocks that will provide private indoor and outdoor spaces and shared community spaces.

* Yimby (Yes in My Back Yard) will be aimed at millennials or Generation Y and will include features like a common kitchen and games room. The first phase of Kubica and Yimby will be built for about $60 million. Kubica’s initial phase will consist of 147 units (80 condos, 67 rental units) in a 17-storey tower. There will be 45 units in the first Yimby development.

* Quartier Sélect will be targeted to empty nesters and active retirees. Its first phase will consist of a $54-million, 18-storey building with 172 rental units of 550 square feet to 1,300 square feet.

The project was designed with the “customer journey” in mind, using 20 different profiles of people and families, Dessureault says. “When they wake up in the morning what do they do? What do they like. That’s how we’re thinking. It’s very different than thinking with a commercial mind(set).”

“A first” for Réseau Sélection in Quebec

Dessureault says research shows Quebecers want to live with people of different ages but “we didn’t take the gamble to put a lot of generations in the same building. As a neighbourhood it will work, but within the same building, no.”

Unlike other projects that develop from scratch, District Union has the advantage of being located next to an existing community with about 1.5 million square feet of retail space nearby. However, retail services like a bakery, restaurant and pub are also planned for the site.

A new elementary school has been built near the project, a sports centre is under construction and a library and aquatic centre are planned.

About 20 per cent of the site, or the equivalent of 10 football fields, will be reserved for green spaces. There will be parks, wooded areas, bike paths and cross-country ski trails.

“In Quebec, it’s a first. That’s for sure,” Dessureault says of District Union.