Considering the fact that Timbercreek Asset Management has built up a $3.5 billion multi-residential portfolio in the past 15-plus years, it should be no surprise to hear its new multi-residential division president promising more growth in the future. 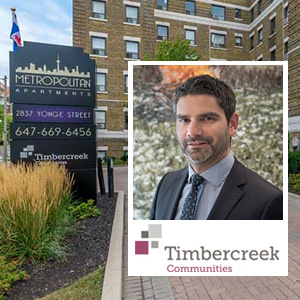 “We have been acquiring properties…every handful of months we close on a property, we just closed on a property in Winnipeg,” said David Melo, recently promoted to president of Timbercreek Communities, the company responsible for the operations of the Canadian multi-residential properties held in Timbercreek-managed portfolios.

Over the first half of this year, Timbercreek has already closed on a “few hundred units,” he said.

From its startup in 1999, Timbercreek’s steady growth got a major boost when it participated in Starlight Investments Ltd.’s privatization of TransGlobe Apartment REIT in 2012. Out of that massive deal, Timbercreek picked up a total of 26 properties making up 5,400 units in Montreal, Ottawa, the Greater Toronto Area, Cambridge, Ont., Guelph, Ont., London, Ont., Calgary and Medicine Hat, Alta.

“At that time, that layered on about 40% growth on our property management platform overnight,” said Melo. “That was the last large material acquisition.”

Now the fifth-largest player in the multi-res game, Timbercreek is well positioned to add to its apartment holdings due to its deep connections in the industry, he added. “It is really the relationships over the years that have been built up, particularly by Ugo.” Ugo Bizzarri, a co-founder and managing director of Timbercreek.

Melo joined Timbercreek in 2004 and has a background boasting more than 15 years of experience in financial and taxation reporting, treasury and corporate financing. He was previously managing director of finance for Timbercreek Asset Management. As well, Timbercreek recently announced that Gigi Wong is joining the company as chief financial officer.

Timbercreek, with a portfolio of approximately 200 properties across the country, sees increasing competition from condos in cities such as Toronto and Vancouver which have experienced condo building booms.

With an older portfolio compared to new or nearly new condos, Timbercreek’s competitive advantage might be its deep pockets. “We do extensive capital improvements to our properties,” said Melo.

Improvements “typically come with higher rents, or improved rents from when we acquired a property,” he added. “But we really need to remain competitive with the market. At the end of the day a prospect is not just going to look at us not just against another apartment building but they will look at us relative to a privately held condo unit.

“Those are our competitors, it is very fragmented, but we constantly put money into our properties to make sure we are always at best in class.”

Beyond the obvious kitchens and bathrooms upgrades, capital improvement spending is often earmarked to energy efficiency spending, says the Timbercreek Communities chief. “A lot of these buildings that we acquire are dated, a lot of them were built in the Sixties, etc. We will go in and look at energy efficiency opportunities, whether it is new boilers, new windows, etc. in terms of new building systems.

The company is also spending “significant capital” on first impression, curb appeal upgrades to lobbies and corridors with an eye to its emerging condo competition.

“These condos are beautiful. You walk into a condo it has a concierge, it has security, it has a gym, it has got a pool. So really have to make sure that we are looking at our buildings and seeing if there is some empty space in there to add amenity space. We will do that in a lot of situations. So really giving our residents not just an apartment, but amenities as well.”

He estimates that the company has added a gym, for example, at 20 to 30 properties across the portfolio.

Timbercreek might not be the biggest, but it wants to be seen as offering the best value relative to its peers.

“You look at it in totality relative to quite frankly your competitors. If we are looking at what is around our existing apartment building, what is the rent that they are charging, what do you get for that rent relative to the quality of residential suite that you will get in our building? Plus we can say `Well, we have added a gym, we have added a backyard courtyard with a barbeque area or we have added a dog run.’ It is sort of the plus, plus, plus that makes our buildings unique.”