A national housing strategy by the federal government doesn’t go far enough to meet the needs of a large group of Canadians finding it increasingly difficult to become homeowners, say industry stakeholders. 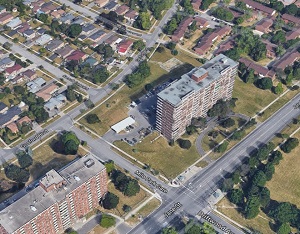 Housing industry stakeholders say the federal National Housing Strategy is focused on social housing and low income earners, but does not do enough to address other affordability and supply problems. (Google Maps image)

On Wednesday, the government announced a 10-year, $40-billion National Housing Strategy to reduce homelessness and improve the availability and quality of housing for Canadians in need.

Kevin Lee, CEO of the Canadian Home Builders’ Association, said the strategy is aimed at a vulnerable population and is more of a national social housing strategy that doesn’t address the wider elements of housing affordability.

“The majority of Canadians are talking about and worried about house prices and how millennials will be able to afford their homes,” says Lee. “We definitely would have liked to have seen something more.

“However, we’ve been engaged in the process and recognize that’s not where the government was going at this time. Although it’s called a national housing strategy, it’s really looking at one part of what we would term the housing continuum – really looking only at that core housing need side of things.

“It is important work. It just doesn’t address all the rest of the continuum where so many people are concerned right now.”

He said a comprehensive strategy would also address issues such as affordability and housing supply shortages in some major cities.

“We know that there’s all kinds of regulation and red tape that is causing additional price increases moving forward. Lots of development taxes being levied on new construction that are further driving up the price of housing,” Lee said. “Obviously, there’s been a lot of changes to mortgage rules in recent times that has made it more difficult to get into housing.

“What else do we need to do, particularly among young Canadians and new Canadians, (to) be able to retain that Canadian dream of homeownership which has defined the middle class over time?

“We are seeing homeownership rates decline now in Canada thanks to all these changes in recent times. What do we do to turn that tide again?”

Jim Murphy, CEO of the Federation of Rental-Housing Providers of Ontario, echoed those thoughts.

“But when you talk about a national housing strategy, you would expect some other things to be part of it.”

He said a housing benefit for those in need is a very positive part of the announcement.

“(But) this is a classic example of a program here that really is targeted at those at the low end income-wise and there is a need for that. People at the high end can look after themselves. But increasingly you have a lot of people in the middle – millennials and others who are making $50,000, $60,000, $70,000 a year – who are facing housing challenges and this program from our understanding certainly is not necessarily going to be helpful to that,” said Murphy.

“In Toronto and Vancouver, we have very high housing prices. Millennials can’t afford to own and increasingly we have very low vacancy rates so they have a very hard time finding a place to rent. And rents have been increasing, too, as housing prices and homeownership prices have been rising. We think there’s a real challenge in the middle and we need more rental housing supply.”

Derek Lobo, CEO of SVN Rock Advisors, says the initiatives are needed because other government legislation has restricted supply.

“If we had left the free market alone, from a rental housing standpoint, we would have had a lot more supply and now we’re trying to fix the problem that legislation has created,” says Lobo, whose Burlington, Ont.,-based brokerage specializes in apartments, student housing and land development.

“The No. 1 enemy of rental housing is not landlord versus tenant. It’s landlords and tenants versus the government – all levels of it. Rent control legislation has (messed) up Ontario’s rental housing. Municipal delays in getting approvals in intensification costs millions of dollars, needless delays in zoning applications and federally a lack of tax incentives . . . removed the incentive to build rental housing and build condominiums.

“The government is trying to fix a problem it created.”

The federal government says 1.7 million Canadians are in need of  core housing assistance. The strategy’s goals are to:

* Reduce chronic homelessness by 50 per cent; remove more than 530,000 households from housing need;
* Create four times as many new housing units as were built under federal programs from 2005 to 2015;
* Repair three times as many existing housing units as were repaired under federal programs from 2005 to 2015;
* and protect an additional 385,000 households from losing an affordable place to live.

It says the federal government will work with provinces and territories to develop a $4 billion Canada Housing Benefit to be launched in 2020 to respond to local housing needs and priorities. It will provide an estimated average of $2,500 per year to each household recipient, assisting at least 300,000 families when fully implemented.

Investment under the National Housing Strategy includes $15.9 billion for a new National Housing Co-Investment Fund to repair existing rental housing and develop new affordable housing. The Fund is expected to create up to 60,000 new homes and repair up to 240,000 existing community homes.