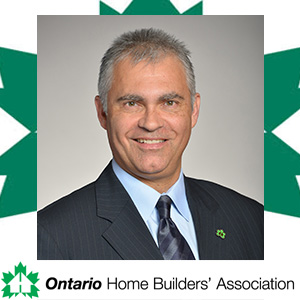 “The mandate is to be the public face of the Ontario home-building industry and its members, including developers, builders, renovators and trades,” said Rodgers. “I’ll represent them on issues in front of provincial politicians and staff on a host of policy issues, matters and legislation that’s in the system and may be forthcoming.”

Meinen, the president of Stratford, Ont.-based Pinnacle Quality Homes, made it a priority to ensure that smaller OHBA locals, builders and developers had a strong voice in the organization. While Rodgers comes from Toronto, he plans to maintain that ideal.

“I’ve travelled across this province and understand that a one size fits all approach to policy and legislation does not work,” he said.

Prior to joining Tribute, Rodgers played a pivotal leadership role in the merger of the Urban Development Industry Ontario and the Greater Toronto Homebuilders’ Association to form the Building Industry and Land Development Association, the largest local home builders’ association in Ontario. With an urban planning degree from the University of Waterloo, work with associations and their stakeholders, and past experiences working with the Ministry of Municipal Affairs and Ministry of Housing and other government organizations, Rodgers is a knowledgeable industry representative familiar with the political sphere.

Rodgers has almost 30 years of experience in land development and said:

“It all starts with land. If the economic foundation of land begins to fall apart, there’s very little room to recover builder profit and developer profit. A weak foundation doesn’t allow for a strong home or community. You have to get land right in order for all of the other elements of the development and home-building construction process to work.”

Ontario’s provincial government undertook a review of the Growth Plan for the Greater Golden Horseshoe, the Niagara Escarpment Plan, the Oak Ridges Moraine Conservation Plan and the Greenbelt Plan last year and came up with proposed changes for the four plans that could affect land usage and building for years to come.

The OHBA will focus on evidence-based research in order to demonstrate what the future of the marketplace will look like with the current policy models that are in place regarding the Greenbelt and growth plan, the Ontario Municipal Board review, building code changes around net zero housing and the Climate Change Action Plan.

Without divulging specifics, Rodgers said, “We want to communicate to government that the proposals they’ve put forward, in our view, have lacked rigorous analysis of the numbers and policy assumptions. That lack of rigour is being upheld by the comments that municipal councils have been weighing in with.”

The OHBA represents 4,000 member companies organized in 30 local associations across the province. Its members have built more than 700,000 homes in more than 500 communities in the last 10 years. The industry contributes more than $45 billion to Ontario’s economy and employs more than 300,000 people.

Rodgers has confidence in Ontario’s economy and the province’s growth due to immigration and he wants to make sure that government policies don’t put these things at risk.

“Homes are where jobs go to sleep,” he said. “As long as this government recognizes the ability for jobs to locate here, I think we will have a strong residential construction industry.”

With regards to his own company, Rodgers said Tribute is keeping an open mind as to where it will make acquisitions.

“Tribute remains an active buyer of both low-rise and high-rise opportunities. Our home will always be in the GTA but, because of land supply, we have had to go further afield.

“We will be starting to sell a project in Fergus, Ontario next spring. We’re becoming more and more active in south Simcoe County with a few acquisitions there. I’m spending more time in my car travelling to these smaller communities that have potential and are effectively in the urban shadow of the GTA.”