Although “Canadian” is the key identifier in the CAPREIT corporate name (Canadian Apartment Properties Real Estate Investment Trust), the apartment owner is not shy about looking beyond the borders of its home country. 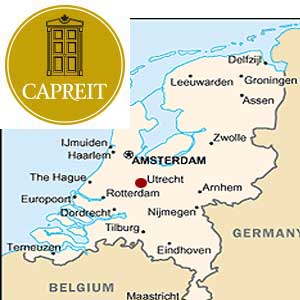 A few years ago it shrewdly identified Ireland as a country poised to enjoy an economic bounce back within the European Union and late last month it moved on what it hopes is another “buy low” opportunity in the Netherlands.

The Toronto-based trust acquired a portfolio of 568 residential apartment suites and townhomes in eight properties in Holland for a purchase price of 64.9 million Euros.

The majority of the portfolio, four properties with 465 apartment suites, are in Utrecht, the country’s fourth-largest city south of Amsterdam. The remaining properties are located in four smaller cities in the east of the country.

“We are certainly well connected in Europe now because of Ireland. That was highly visible, everybody saw it, so we get called with lots of opportunities.”

CAPREIT is a picky Euro shopper however, according to Schwartz.

“I try to go where everybody isn’t. So we are not in Germany, we are not in Spain. Those places are very, very overcrowded with investors today.”

Like Ireland, the size of The Netherlands market also allows CAPREIT to be a comparatively bigger player.

“I’m comfortable in smaller markets. Netherlands is a smaller market but has a lot of the attributes we look for. Demand is greater than supply, there is good volume of transactions and there is opportunity to do active management and upgrade and raise rents and make money which is how we do things.”

Despite its relatively small size, The Netherlands is also a familiar market to Schwartz and his team given that a large number of REIT investors call it home (in the form of Dutch pension funds). “It is a place I have been going to for years.”

The trust hopes to implement its successful Irish formula in Holland: profitably enter a new market “and quickly build a property portfolio with the size and scale to generate significant benefits” for shareholders, explained Schwartz.

The newly acquired apartments boast locations “close to public transit, parks, retail shopping, universities and schools, as well as other amenities” in a country with a “current housing shortage” and is a place where people prefer to rent, the trust added.

Don’t expect CAPREIT to be ‘one and done’ when it comes to its Dutch foray. “At this point what our goal is is to build a portfolio in The Netherlands similar to what we are doing in Ireland.”

CAPREIT’s Irish apartment portfolio is currently just over 2,400 units and the trust has stated publicly that it intends to grow that to 5,000 to 7,000 apartments.

The implications of a Britain’s impending departure from the EU (Brexit), was not a key consideration in the recent Dutch acquisition, although it may be a benefit in the future.

To date, CAPREIT’s holdings in Ireland have been beneficiaries of Brexit maneuvering.

“Ireland is benefiting tremendously. The office market is on fire because a lot of the English companies are taking space, because of Brexit, because that will be the only English-speaking place in the EU.

CAPREIT has spun its Irish apartment holdings into a separately traded REIT in which it remains the largest holder with the assets management and property management contracts for the portfolio.

Schwartz said it is “too early” to say whether a similar arrangement will be created for The Netherlands. “We will look at all opportunities.”