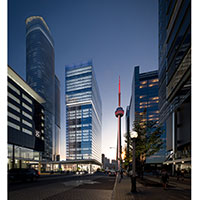 Cadillac Fairview, which will have a 70 per cent stake in the $479-million building, is so confident that it made the announcement to move forward without first securing an anchor tenant, a first for the company.

“It’s unusual for us to do this, but it’s also unusual circumstances,” said Cadillac Fairview executive vice-president of development Wayne Barwise. “The market factors are very compelling today and we have the instance of a rare confluence of some very favourable conditions.”

Barwise cites a historically low four per cent vacancy rate for class-A office space in Toronto, which is among the lowest in North America.

Vacancy rate only 1.5 per cent

The vacancy rate in the south core — bounded by railway tracks and Lake Ontario to the north and south, and Lower Simcoe Street and Lower Jarvis Street to the west and east — is lower still at 1.5 per cent.

About three million square feet of office space is being delivered in the south core this year by Brookfield Properties, Menkes Developments and Oxford Properties Group, and it’s already 92 per cent leased, according to Barwise.

Cadillac Fairview is in discussions with a number of prospective tenants who have expressed interest in 16 York.

“There’s a terrific pipeline of prospective quality tenants out there,” said Barwise. “We think the market potential is somewhere between three and five million square feet worth of tenants that are looking for new premises.

“Our current Toronto office portfolio is a little over nine million square feet and will be 10 million by the time 16 York is completed. We are 97.6-per cent leased, which is good news, but it also means that we have no current expansion capacity for our existing tenants and clients.

“As they grow, we like to grow with them. One of the opportunities with 16 York is to expand with some of our existing tenants who wish to grow.”

Scheduled for a 2020 opening

The building at the southwest corner of York Street and Bremner Boulevard will include 879,000 square feet of office space, three underground parking levels with 289 parking stalls and 7,000 square feet of ground level retail space. It’s scheduled to open on June 1, 2020.

OPB’s 30 per cent interest in 16 York isn’t the first time it has been involved with Cadillac Fairview.

“They are a pension fund that is interested in participating in the investment returns that can be generated through ownership in quality class-A office and retail. It’s a like-minded entity and a great partner, and the previous properties we were involved in with them have worked out extremely well. We’re excited to be continuing with them on this project as well.”

It will include a one-acre green roof, a courtyard adjacent to the building, a connection to the downtown PATH pedestrian walkway system and several elements to promote efficiency and sustainability.

“Smart buildings offer better lighting control systems with occupancy sensors so you can save on energy costs,” said Barwise. “Smart energy systems provide real time data and predictive data so that we can better manage the energy spend in the building.

“This is something that’s becoming increasingly important to tenants, especially in an environment like Ontario where hydroelectric rates keep going up at an extraordinary rate. We’re doing everything we can to try and reduce costs in that respect so tenant occupancy costs can be more manageable.”

Cadillac Fairview kicked off the south core boom with its construction of Maple Leaf Square — which includes office, retail, entertainment and residential space — 10 years ago. Since then, an area that used to be filled with vacant lots has experienced $4 billion worth of development.

“I wouldn’t say it’s becoming saturated, but we are running out of available land parcels,” Barwise said of the south core. “It’s hard to find land, but there are still some sites down there and still some opportunities to build.”

Cadillac Fairview recently completed its ICE Condominiums on the same block as 16 York. All 1,343 units in the 67- and 57-storey towers were sold and the retail space available at ground level that was held off the market will now be leased in conjunction with the 7,000 square feet at 16 York.

“The retail there will be complementary to both residential and office occupants of the buildings,” said Barwise. “That could include restaurants, cafes, other service-type retail and possibly a bank branch.”

Cadillac Fairview and OPB also co-own another future development site at 160 Front St. W., directly north of south core. Barwise said the building design and site plan approvals are in place and “there are a few other minor things to complete with the City” before Cadillac Fairview turns its attention to beginning construction.

“We’re going to be rebuilding the corner of 2 Queen, at Yonge and Queen streets, with seven storeys of mixed office and retail and restaurant,” said Barwise.

“We have some exciting new retailers that are coming into the Eaton Centre. We’re going to be building a new bridge connecting the Eaton Centre to Hudson’s Bay and Saks Fifth Avenue.”

The existing bridge connecting the two structures above Queen Street West will be removed in May and the new one will be erected in June and July and should open in November.