The Calgary Municipal Land Corporation will reveal its master plan in January for the Victoria Park neighbourhood in Calgary, adjacent to the Calgary Stampede, and the plan includes provision for a new arena, RENX has learned. 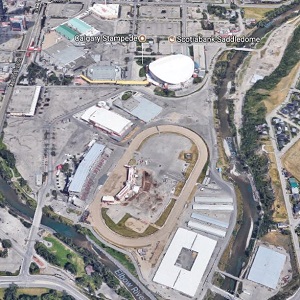 The Calgary Municipal Land Corporation will unveil its Victoria Park Master Plan in January, RENX has learned. The lands, adjacent to the Calgary Stampede property, will include provision for a new arena to replace the Flames’ Calgary Scotiabank Saddledome (shown). (Google Maps image)

Michael Brown, president and chief executive of the wholly owned subsidiary of the City of Calgary, says the master plan lays out a blueprint for what the community eventually will look like.

“Right now, we really only have Plan A and that’s with a new arena. If in five, six, seven years from now, there’s been no progress on a new arena then we’re going to have to go back and revisit that one. But, for now we’re focused on that’s where the arena will go.”

A new arena has been a controversial issue in Calgary in recent months with the city’s Mayor Naheed Nenshi and the National Hockey League’s Calgary Flames at odds. Talks have broken down and recently the Flames’ organization said it would not be pursuing a new arena.

The professional hockey team plays out of the Scotiabank Saddledome which is also located in the Victoria Park neighbourhood on Stampede Park land.

“In January, we’ll be rolling out our master plan for the area that we’ve developed with the Stampede and other partners within the area with the idea of getting the community onboard because we think this could be quite a remarkable project,” says Brown, who also spoke briefly about the master plan at the recent Calgary Real Estate Forum.

Over the past year and a half, CMLC has been working with the city, the Stampede and various stakeholders to establish a vision for the area located just south and east of Calgary’s downtown core. The neighbourhood, with many vacant lots, sits adjacent to Stampede Park and borders East Village – another similar neighbourhood the CMLC has helped develop over the past decade.

Brown says there will be a community engagement initiative launched in January for the Victoria Park master plan that will answer many questions about future development.

“Victoria Park is a big move that we’re working towards,” says Brown. “Victoria Park and East Village is one of those land plays that we’ve always looked at. This could be amazing.”

The East Village master plan vision, which has entered the second half of its 20-year buildout, will eventually include 11,500 residents in about 3,900 units in a master-planned community across 15 city blocks with a combination of mid and highrise dwellings.

East Village is on 49 acres and more than 800 new homes have already been completed between four residential towers.

Ten years into its 20-year plan, Brown says, the CMLC has invested $357 million into the redevelopment of East Village and it has attracted over $2.7 billion in private sector investment.

Brown says it doesn’t make sense for the organization to pursue the office market right now as long as the city grapples with a high downtown vacancy rate that is in the neighbourhood of 25 per cent.

Currently, there are seven cranes active in the East Village site building a boutique hotel, an urban format grocery store, the library and market and rental residential buildings.