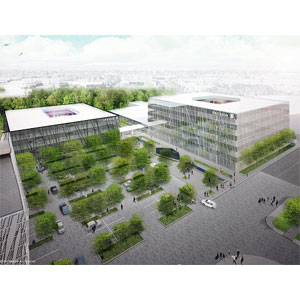 Montoni and Claridge will retain a 30 per cent stake while the unnamed pension fund, which paid an undisclosed price, will own 70 per cent. JLL negotiated the deal.

“The property was marketed globally through JLL’s International Capital Group and was literally sent to thousands of the main institutional investors around the world,” said JLL capital markets vice-president Scott Speirs. “At the end of the day, the top bidders were all Canadian pension funds.”

When completed at the end of the year, the state-of-the-art, class-AAA facility will total 265,350 square feet and be fully leased to Ericsson Canada, a wholly owned subsidiary of Swedish telecommunications giant Ericsson Telefonaktiebolaget L.M. It will act as a research and development and service centre.

The property in the Montreal borough of Saint-Laurent provides easy access to the Trans-Canada Highway and Highway 13. It’s in close proximity to Montreal-Pierre Elliott Trudeau International Airport and is a 15-minute drive from Montreal’s downtown core. It includes more than 1,100 underground parking stalls.

The Ericsson campus at the Ville Saint-Laurent Business Hub will include four energy-efficient buildings set amidst green space with common areas and pedestrian and bicycle paths. It’s targeting LEED Gold certification and will feature the latest chilled beam technology HVAC systems and plenty of natural light.

The 1,700-plus future employees will be able to take advantage of a cafeteria and fitness and daycare facilities.

“This will be one of the highest quality office buildings in Canada,” said Speirs, who expects the transaction to be one of the most significant in Quebec  this year.

Ericsson will lease the entire facility for 15 years and has two additional five-year renewal options. Rents will increase by 12.5 per cent every five years. Ericsson will be financially responsible for management, operations and capital improvements over the entire lease term.

Laval, Que.-based Montoni is a commercial development, construction and property management company that’s been involved in industrial and commercial projects totalling more than 12 million square feet, as well as 10 office buildings. It has 15 million square feet of other projects in progress or substantially completed.

Montreal-headquartered Claridge is an investment firm founded in 1987 by Charles Bronfman. It now represents the interests of the Stephen Bronfman family and is actively involved in managing a diverse portfolio of third-party investments as well as direct equity participation in the food, technology, energy, entertainment and real estate industries.

The new campus will be one of Ericsson’s largest research and development centres outside of Sweden and is the second large-scale project recently undertaken by the company in Montreal, in which it has had a presence since 1953.

Ericsson previously invested $1.3 billion in a 400,000-plus-square-foot, LEED Gold-certified information communication technology centre in the suburb of Vaudreuil-Dorion, a 20-minute drive west of the Saint-Laurent campus, that’s slated to open later this spring. It will be one of three such centres for the company and the first outside of Sweden.

While the centre will create only about 60 engineering jobs, it’s expected to generate some $5 million in annual tax revenue for the municipality through the first five years and more past that point.