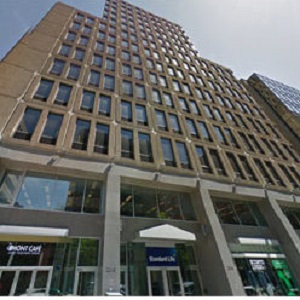 The head office for Nexus REIT on Stanley St. in Montreal.

“We were two smaller entities that, when you put them together, were able to increase our size and scale,” said former Edgefront president and chief executive officer Kelly Hanczyk, who now serves as Nexus’ co-CEO with former Nobel president and CEO Jean Teasdale.

“That alone makes us more relevant. It really allowed us to diversify our sector exposure and introduce both entities to new geographical markets. Edgefront was more western-based and Nobel was Quebec-based, so when you put the two together we’re now national right across Canada.”

Nexus owns a portfolio of 36 properties, comprising approximately 2.1 million square feet of rentable area with a gross book value of around $300 million, in primary and secondary markets. The properties have 76 combined tenants.

Nexus’ assets break down this way: 78 per cent industrial; 16 per cent office; three per cent retail; and three per cent mixed-use. Edgefront was completely invested in industrial properties before the merger.

“We’ll still look to have industrial as our main focus, with retail and office making up the balance,” said Hanczyk.

Hanczyk and Teasdale met randomly at an industry event last September and, after chatting, decided to have lunch together the next day.

“We sketched out a merger plan on the back of a napkin, and away we went,” said Hanczyk, adding it took from October to February to go through all of the due diligence and get the boards of both REITs on side with the deal.

The merger is expected to be accretive to adjusted funds from operations per unit for the first year, with additional organic growth and further accretion upon completion of the lease-up strategy for a downtown Montreal office property at 2045 Stanley St. that Nobel purchased half of last year.

That building now serves as Nexus’ main office, while Hanczyk and chief financial officer Robert Chiasson are based in Oakville.

Synergies and cost reductions are expected through internalizing and integrating Edgefront and Nobel’s management teams and operating platforms. Hanczyk said the fully internalized management structure has “taken any type of hurdle away from investing in” Nexus and will emulate “best in class” Canadian REITs.

The merger will also give Nexus enhanced capital markets presence, a potential lower cost of capital, and proprietary access to a robust pipeline of acquisition opportunities and relationships through sponsor unitholders TriWest Capital Partners and RFA Capital Partners Inc.

“It gives us a huge pipeline that we’re going to be able to act on to grow significantly,” said Hanczyk.

Nexus had a market cap of approximately $125 million on the TSX Venture Exchange as of Monday. Hanczyk said Edgefront was trading at around $1.94 per share when the merger was announced on Feb. 14 and Nexus is now in the $2.30 range.

“The market woke up to the story and we’ve been out marketing. They really like the fundamentals that we’ve put together with the combined entities.”

While Hanczyk said it’s too early to announce any acquisitions, he said Nexus’ staff is “always working on things.”