Nexus REIT’s recent purchase of a half stake in a Quebec portfolio of Sandalwood Management prope...

Nexus REIT’s recent purchase of a half stake in a Quebec portfolio of Sandalwood Management properties represents about a 50 per cent increase in Nexus’ gross book value to about $450 million. 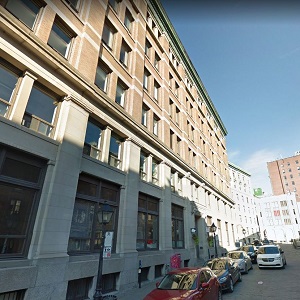 410 St. Nicolas in Montreal is part of a portfolio of properties Nexus REIT has purchased a 50 per cent stake in. (Google Street View image)

The purchase price for the 1.53 million square feet of gross leasable area works out to about $97 per square foot, “which is well below any replacement value,” Nexus REIT co-CEO Kelly Hanczyk says. The cap rate is about 7.3 per cent, making it “a little bit more attractive than what you’d get on a fully marketed portfolio.

“We’re a little bit opportunistic-driven and this was a fantastic deal that was brought to us.”

The off-market deal, which will give the REIT (NXR.UN-X) a portfolio of 62 properties with 3.5 million square feet of total gross leasable area, was actually introduced to Nexus by RFA Capital Partners, one of its major shareholders.

The deal “gives us the opportunity to get core Montreal office properties that you wouldn’t typically get to see in a REIT our size,” including the Old Montreal properties, Hanczyk says.

“I call them Allied REIT-quality buildings. For a REIT to get them off market, (given) our size, I think it’s a little bit of a stroke of luck that we have through the relationship with RFA.”

Sandalwood is a private real estate firm headquartered in Austin, Texas and Montreal that owns and manages more than 80 properties across North America.

The acquisition will be partially financed by $55 million in bought deal equity financing and a $15-million private placement with RFA Capital Partners..

Quebec the “steady Eddie” of CRE

In Montreal, the acquisition gives Nexus 50 per cent ownership in several office properties in Old Montreal, including the 155,000-square-foot 410 St. Nicolas, and a number of retail centres, such as Les Halles d’Anjou and Les Galeries Taschereau.

While the West is up and down and Toronto is very expensive, prices in Quebec are very attractive from a cap rate standpoint and the market is quite stable, he says. “I call it our steady Eddie on the commercial real estate side.”

Hanczyk  says he toured all of the Old Montreal office buildings and “they are well-located and fantastic quality. They’ve been maintained really well” and do not require a lot of capital expenditures.

On the retail side, Les Halles d’Anjou “is a fantastic retail centre and probably one of the gems of the portfolio.”

Many of the retail properties are service-oriented and well-anchored with retailers such as Canadian Tire, Metro, IGA, Pharmaprix (Shoppers Drug Mart) and Dollarama. “There is no huge exposure to something like a Sears or fashion retail which is undergoing quite the pressure.”

Hanczyk says there are some opportunities to develop additional pad sites at some of the retail centres, with standalone retail or restaurants such as Tim Hortons (QSR-T).

Overall, the properties are 90 per cent leased.

Once the Sandalwood portfolio is absorbed, “you’ll see us return with a focus more on Western Canada and Ontario for future growth,” Hanczyk says. “We have a fairly significant portfolio in Quebec after this, so unless it’s a very attractive asset, which we can take one-offs here and there, our focus will be on expanding the portfolio across Canada.”

While the Sandalwood portfolio increases Nexus’ overall retail exposure to about 26 per cent, the REIT – formed in April by the merger of Edgefront and Nobel REITs – says its growth strategy will continue to be primarily focused on industrial properties from which it derives 51 per cent of its operating income.

Sandalwood will continue to provide property management of the buildings in which it has a 50 per cent stake, while Nexus will provide asset management services on the portfolio.