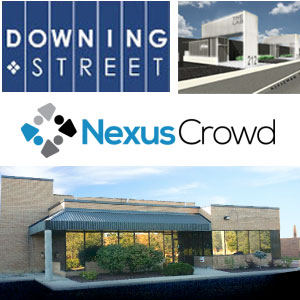 The raise was part of a $5.8-million equity raise for Toronto-based Downing Street Realty Partners, which has two industrial properties in Toronto and one in Mississauga that require redevelopment and remediation spending.

The Downing Street industrial properties, which total 110,000 square feet, have already undergone some redevelopment work. The two Toronto properties contain environmental contamination and are currently being remediated with an expected October completion date.

The $500,000 raise, completed in December, marks the second successful crowdfunding venture for NexusCrowd and the first experience Downing Street has had with the funding vehicle.

Marc Canale, a partner at Downing Street, said his company had watched the development of crowdfunding for commercial real estate in the U.S. and was eager for an opportunity to participate in this emerging financing market.

“It is new to Canada, there are 175 firms in the U.S., but I think that there are a few of them popping up in Canada and I think there will be many more.”

Canale, one of four partners at the venerable real estate firm, said the attraction of crowdfunding is what it can represent in the future rather than the $500,000 for its current project.

The Downing Street partner noted he worked for a number of years in Asia, where crowdfunding has been long established in a more rudimentary fashion.

“(NexusCrowd) will be a much larger funding source for us down the road and the only way for them to start is to start small.”

Canale added his firm expects to close on “a couple properties in downtown Toronto and southwestern Ontario in March and its new crowdfunding partner “will definitely be into the next deals.”

Downing Street, founded in 1986 by president/CFO Daniel Odorico, is well-established as both a lender in the real estate space and as a short-term owner of select properties close to its home base. For the most part, it is funded by high-net-worth investors contributing an average of $150,000 in both equity and debt investments.

“We are value-add guys and then we exit. All the real estate we own is in Ontario.”

Shoe leather may be the company’s most valuable asset. “We are like feet on the street guys,” says Canale. “We find opportunities off-market, banging on doors, making offers off-market. It is hard if you are not on the street.”

Downing Street’s operating program calls for it to buy, redevelop and sell properties as quickly as possible. “Never more than two or three years,” explained Canale.

That means the clock is ticking on the three industrial properties involved in the latest crowdfunding. “This particular transaction we acquired in August of 2014 and we anticipate exiting August, September, October of this year.”

Canale said the company’s most notable transaction was the sale of a portfolio of seven Toronto class-B office buildings to Blackstone Group (BX-N) in 2005.

“I think the NOI was $7 million, so (Odorico and chairman/CEO Anthony Alberga) were always value-add guys in the downtown office space sort of along the subway lines.”

Odorico and Alberga, who joined the firm in 1987, are the longest-serving partners of Downing Street. The fourth partner is principal broker Robert Shiller.

NexusCrowd, with its second successful raise in three months, is hoping to capitalize on a U.S. trend enabling small investors to back real estate plays alongside high net worth and institutional investors.

Under its model, crowdfunder participants can sign up at its website and participate in investments for as little as $10,000, as much as 25 times less than the average individual investment for the industry, according to NexusCrowd.

“Our goal at NexusCrowd is to continue fostering long-term partnerships with successful institutional developers and private- equity investors to ensure we are providing individual investors access to attractive and exclusive investment opportunities.”