Nobel Real Estate Investment Trust (NEL.UN-X) moved from the red to the black last year and will capitalize on that momentum by moving its headquarters to the downtown Montreal office building which it’s purchasing half. 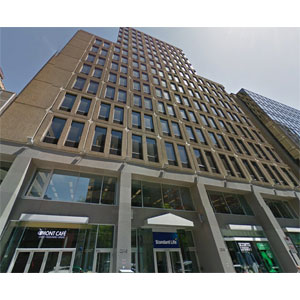 The Chambre des notaires du Québec will occupy a minimum of 40 per cent of the gross leaseable area starting in December 2017.

“The notaries were looking for a partner to operate and take care of the building, so we thought it was appropriate for us and an opportunity to address the downtown market with a prestigious partner and a prestigious tenant,” said Nobel president and chief executive officer Jean Teasdale.

The aggregate purchase price is approximately $12.5 million, excluding acquisition costs, and the deal is expected to close on or about April 1. In addition to its ownership stake, Nobel will manage the 14-storey class-B building that was built in 1978.

The 113,716-square-foot tower on Stanley Street between Sherbrooke Street and De Maisonneuve Boulevard is less than 100 metres from the Peel subway station.

Standard Life occupies the entire building and is leasing the space from Fiducie Notariale Immobilière, which purchased it from the investment, retirement and financial protection company last year. Standard Life will vacate the premises at the end of the year.

Nobel will take about 8,000 square feet for its operations as soon as it becomes available and is seeking to lease the remaining space that won’t be occupied by Chambre des notaires du Québec. Teasdale anticipates 80 per cent of the building will be spoken for by the end of 2016.

“It’s well-designed, very straight-forward and simple,” Teasdale said of the new acquisition. “The building has been very well-maintained and is in very good condition.”

Nobel is working to finalize the necessary financing to complete the acquisition and expects to reveal details shortly.

The REIT concentrates on industrial buildings, retail locations, office properties and mixed retail and office space located within a two-hour drive of its headquarters in Longueuil, located on the south shore of the St. Lawrence River directly across from Montreal.

Nobel acquired eight investment properties in 2015, doubling the amount it owned at the end of 2014. All 16 are located in Quebec and comprise 763,729 square feet of gross leaseable area.

Nobel launched in November 2012 and trades lightly on the TSX Venture Exchange, where it has a market cap of about $25 million. The REIT received a $10-million private placement from Toronto-based RFA Capital in 2014 and closed a brokered private placement for $12 million last year.

“Our main sponsors are very solidly behind us and are very dedicated to our business plan,” said Teasdale.

Nobel’s properties are 97 per cent occupied and there are plans for another acquisition soon, but Teasdale couldn’t yet talk about it.

“There’s no issue in finding good product and finding properties for sale at decent prices,” he said. “The challenge remains equity financing.”