Nonprofits must make more efficient use of space

Many nonprofit organizations and charities aren’t making the most effective use of their office space, which may also be contributing to rising employee churn rates. 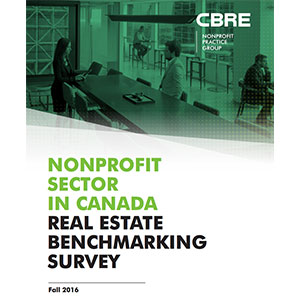 “While it’s hard for nonprofits to compete on salary, they can use real estate to create spaces that keep employees engaged and motivated,” said CBRE vice-president and broker Dominic Dostie. “Access to transportation hubs, bicycle parking, amenities, shopping and green space is key.

“Organizations can also create an office that incorporates health and wellness, caters to a variety of work styles to meet the needs of a multi-generational workforce, and provides staff with a variety of spots for collaborative or individual-focused work. Wellness is becoming a very important feature of workplace design and is aligned to many non-profits’ mission statements.”

Thirty-five per cent of nonprofits surveyed reported that they’ve resided at their current headquarters for longer than 10 years, while 30 per cent have been in the same location for between six and 10 years, 26 per cent reported between one and five years, and nine per cent had been there for less than a year.

Eighty-two per cent of respondents lease their headquarters and, on average, organizations have leases spanning from six to 10 years. While many organizations prefer longer-term leases to maximize leasing concessions and reduce out-of-pocket project costs related to relocation and tenant improvements, the majority that lease prefer the flexibility of shorter terms.

Nonprofits that own their properties plan to occupy the space for more than 20 years.

Long-term owners face increasing challenges with their space since, not only are their properties more likely to be in need of significant maintenance or repairs, but they’re also more likely to experience challenges associated with recruiting and retaining employees due to the inherent limitations of the existing building or its location.

“Some nonprofits worry about the perception generated from deploying capital to upgrade their offices,” said Dostie. “However, time and time again we see that small capital investments to improve the working environment filters down to the bottom line through increased staff retention and engagement.

“Remember, headcount is typically 70 to 80 per cent of a typical organization’s overhead, and real estate only 10 per cent.”

Twenty-four per cent of respondents said they would run out of office space soon. When asked if they planned to expand both staff and office space, 26 per cent of organizations replied “Yes.” Of those that moved locations, 32 per cent said it was due to increased staff and 32 per cent did it to gain greater space efficiency.

“Since there’s no one style of working anymore, organizations can invest in reformatting their space to include more collaboration spaces, individual working areas and central gathering spaces for staff,” said Dostie.

“Nonprofits can also invest in technologies that help cut down on paper use, requiring less filing cabinets and shelving, freeing up space for more collaborative areas that are known to increase engagement and help staff feel more connected with colleagues.”

While large organizations are more efficient with their use of space than smaller ones, smaller nonprofits are gaining ground. Still, organizations with 20 employees or more reported an average square foot per employee of 202, compared to 417 recorded by those with 20 or fewer employees.

“Smaller users have less employees to distribute common spaces such as board rooms, reception areas, meeting rooms and kitchenettes,” said Bongard. “This results in a higher space occupancy on a per person basis.”

Telecommuting continues to gain popularity in the nonprofit world. Forty-seven per cent of organizations have discussed alternative work environments such as desk-sharing, using hotels and working remotely.

“When nonprofits have increased telecommuting and remote working options, they tend to be leaner in their use of space,” said Bongard. “Our study found that larger nonprofits that have or are developing a telecommuting policy average 189 square feet per person, while those that don’t average 225 square feet.”

While continuing to face challenges, Dostie said nonprofits realize they could be making more efficient use of their real estate and are slowly but surely making strides to do so.

“Thirty-one per cent of respondents stated that they have recently reconfigured their offices or are actively planning to become more efficient in their space.”