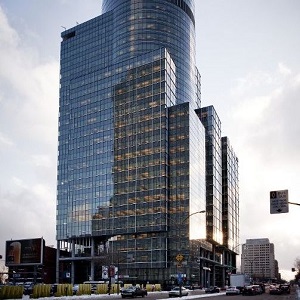 The buildings at 1350 and 1360 Rene Levesque Blvd. W. were purchased by GWL Realty Advisors for $429 million, at a capitalization rate of around five per cent, which signals they are premium assets.

Completed in 2003 and 2004, respectively, and originally known as Cité du commerce électronique (E-Commerce Place), the buildings have about one million square feet of space. They were owned by KanAm Grund of Germany.

Poliquin said the sale also shows interest in Montreal has increased among Quebec, Canadian and foreign investors and that the investment market is becoming very competitive.

“We’re living through something in Montreal that hasn’t been seen since the 1960s,” added Poliquin, citing a number of developments in the city that are worth billions of dollars.

He was one of the speakers at the Montreal Real Estate Forum on March 28 who discussed the evolution of the Montreal office market.

Brian Salpeter, senior vice-president, development at Cadillac Fairview, said the five per cent cap rate sale is “a positive sign for the value of buildings downtown.”

Marie-France Benoit, senior director, commercial products, data solutions, Altus Group, said the office vacancy rate for class-A space downtown has stabilized in the last year and is now at 10%. Vacancy rates downtown should remain relatively stable for the next two years, she said.

Other positive signs include an unemployment rate in the city that is at its lowest in 30 years and the fact the number of office buildings downtown with 50,000 square feet of vacant contiguous space has fallen from 22 to 15.

She added the midtown area of Montreal, which includes the Mile Ex area north of downtown, is becoming popular for the conversion of former manufacturing spaces into loft office space. The area has seen more than two million square feet of recent conversions and is fertile ground for start-ups and a creative workforce.

Mid-market loft inventory now represents more than 10% of the office space in the Montreal area and there is a continued trend of absorption in the midtown market, said Vincent Chiara, president and CEO of Groupe Mach.

Richard Hylands, president of Kevric Real Estate, said the growing popularity of Mile Ex “is not at the detriment of downtown. It’s complementary. Downtown is undergoing renewal,” he said, citing the decline in the availability of large spaces for leasing.

“We’re feeling a renewal in Montreal,” he added, noting the timing for this year’s 375th anniversary festivities in the city is excellent.

Salpeter said he is convinced there is room for new development downtown, despite the fact the area has recently seen the development of one million square feet of class-A space.

Definition of downtown is expanding

He added the definition of downtown is expanding, with the area now continuing toward Griffintown, south of the traditional downtown. Cadillac Fairview is currently developing Quad Windsor around Windsor Station and the Bell Centre, an area that links downtown to Griffintown.

Chiara agreed the downtown core is shifting to the south but that much of the land has been bought by residential condominium developers who are willing to pay a premium price compared with office tower developers.

Municipal officials will have to ensure a balance is maintained between condominium and office development in order to keep the downtown area strong, Hylands said.