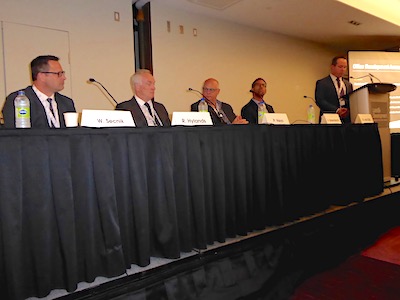 CoStar Group‘s Roelof van Dijk delivered a positive outlook to office development panelists at the Toronto Land & Development conference: “Fundamentals across the country are exceptionally strong in the office market.”

Almost all markets outside of Alberta have seen vacancies drop in recent years, said Van Dijk, CoStar’s market economist and head of market analytics for Canada. That demand is leading to growth in annual rents and strong pre-leasing for new office buildings under construction.

Van Dijk moderated a panel of four executives on May 29  at the Metro Toronto Convention Centre. He said vacancy rates will probably double due to new supply set to come on to the market, but going from three to six per cent isn’t a game-changer in Toronto.

It’s good to give tenants more options and, even if rent growth comes down, he believes the Canadian office market will remain healthy.

It’s not always possible to build new, however. Renovating and future-proofing existing office buildings is also important in today’s market.

Kevric Real Estate Corporation Inc. president Richard Hylands said tech and new economy tenants are more interested in the character of a building than its age, size or shape. The office has to reflect the company’s image and help it attract new employees.

He cited the success Kevric has had as a result of major strip-downs and repositioning for Toronto buildings at 150 Bloor St. W. and 40 Hanna in Liberty Village, as well as its plans for a site at Eastern Avenue and Lake Shore Boulevard West.

B+H Architects principal Peter Heys said tech companies have a do-it-yourself attitude and are willing to do things themselves to convert their office spaces. Being on brand is very important to these firms.

WiredScore works with 500 million square feet of real estate in six countries. Founder and chief executive officer Arie Barendrecht described the innovations at Brookfield Place and 75 Rockefeller Plaza in his hometown of New York City to revitalize the properties, making them more attractive to both tenants and the public.

The same amenities needed in downtown core office buildings to attract and retain employees will also make suburban locations work, according to Hylands. His company manages a portfolio of more than 3.4 million square feet at 14 buildings in Montreal and Toronto.

“Suburban locations that are in more city-centre type of environments are going to probably, in the medium- and long-term, do a lot better than buildings surrounded by a parking lot,” he said.

Toronto’s million-square-foot Consilium Place was built in 1980 and purchased by Kevric in 2012. The company redid public areas, introduced a new food court, installed terraces and quiet zones, and filled up the entire complex for the first time.

Fifteen acres of land have been freed up because of decreased parking requirements, so the property will be intensified with nine purpose-built rental apartments of about 40 storeys each. There will also be more green space to connect with an existing ravine network.

Fiera Properties senior vice-president of investments William Secnik said some suburban transit nodes have been under construction for a significant time.

While he expects they’ll pay dividends in the longer term, office leasing thus far hasn’t performed as expected because of inconveniences caused by road construction.

Co-working talk dominated the last part of the session, as Heys noted companies in the sector have quickly scooped up a lot of office space.

WiredScore uses WeWork space for its offices in Paris, Berlin and Chicago. Barendrecht believes co-working companies are forcing landlords to use technology to create productive, experience-rich environments for users.

However, Barendrecht added that WeWork can be an impediment to recruiting for his company because he “can’t communicate the WiredScore core values and culture as a business because the WeWork brand is so strong.”

While flexible leasing is vital to his business, he’d prefer to do it with a partner that would allow the WiredScore brand more prominence.

Heys believes co-working spaces probably cause more wear and tear in office buildings because users are more transient. He added that there’s more traffic in and out of buildings, which can extend waiting times for elevators.

WeWork offers great tools for startups and smaller users, Hyland said. However, he doesn’t think established companies utilizing the services temporarily until moving into new space of their own need all of those amenities and might not want to pay for them.

He believes more Canadian landlords with large buildings will start offering swing space to these types of tenants, as is occurring with some developers in the United States.

“It’s a really nice tool to deepen their relationship with their existing tenant base,” said Barendrecht.