Office staging is a force that’s here to stay

“Staging” houses so they make a good first impression has long been a way of trying to sell them faster and for higher prices. Now that trend is becoming more common in office leasing, and both landlords and tenants seem to be reaping benefits from the practice. 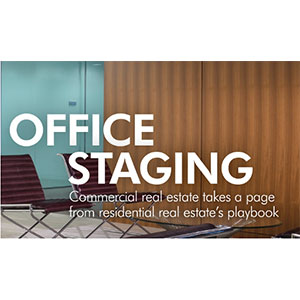 “We have hundreds of brokers out in the market touring office space every day, and it’s a trend they say started many years ago,” said Werner Dietl, executive vice-president and Greater Toronto Area (GTA) regional managing director for CBRE Canada, which issued the new “Office Staging: Commercial real estate takes a page from residential real estate’s playbook” report.

“However, the increase in the use of office staging over the last 18 months is what has really caught our attention. Our research shows that of all active class-A greater and financial core listings in Toronto, nearly three-quarters are built out or staged.”

Office landlords are building out empty floor plates with meeting rooms, kitchens, a mix of office and open work areas, and functional reception areas. Unlike residential staging, where furnishings are removed after a showing, these attributes remain intact for office tenants taking occupancy so they don’t have to put the time or effort into creating a functioning space.

“Most businesses might move only once every 10 years, so they are not necessarily experts in office design and layout,” said Dietl. “So rather than taking business owners around an empty floor plate, where it’s hard to visualize a fully functional and completed office, landlords get to show potential tenants these staged spaces where it’s much easier to envision their business operating and growing.”

Staged office spaces typically range from 1,000 to 5,000 square feet, have shorter lease terms and are leased at a premium to offset the landlord’s capital investment.

This can enable owners of existing B- and C-class properties to stage spaces that can better compete with new builds by offering tenants modern amenities and layouts while also giving small companies flexibility for when they grow and need larger locations.

“However, by offering tenants shorter lease terms in smaller staged units, landlords can diversify their portfolios and earn income on the space without jeopardizing the relationship with the larger tenant.”

The relationship created between the small space renter and landlord from that initial tenancy can often continue, as the building owner may have bigger and more suitable options within its portfolio for the tenant’s new needs.

“When you consider that nearly 90 per cent of Canadian companies employ between one and 19 people, it opens up a huge new target market,” said Dietl. “Growth companies want to focus their energy and capital into growing their business.”

Office staging generally costs the landlord between $50 and $100 per square foot, which is often less than what a tenant would pay since the landlord has more experience with build-outs and economies of scale.

Tenants who opt to locate in these spaces pay a premium of from four dollars to $10 per square foot. Despite the higher rate, landlords usually don’t fully recover their investment in the space with the first occupant. That typically comes when units turn over, as often only minor renovations are needed then.

Office staging is taking place across Canada, according to the report, which was compiled in part by CBRE’s national research and national occupier teams surveying Dream Office REIT, Amacon, Brookfield Properties, Oxford Properties Group and Allied Properties REIT. Those five landlords use office staging across the GTA and represent more than 90 million square feet of Canadian office space.

“In markets where there’s a lot of available space, such as Calgary, smaller units, typically between 2,000 and 4,000 square feet, are built out to help set the space apart and attract tenants looking for open concept space and shorter leases. In Montreal, small built-out space is highly sought-after, so any unit below 3,000 square feet is automatically staged.”

Dietl doesn’t see office staging as a passing fad, but as a force that’s here to stay.

“Office staging is a way for large landlords to complement the growing phenomenon of co-working spaces, such as WeWork. Our research shows that the average size of a company operating out of a co-working space is one to three people. Once a firm grows beyond that, the value of co-working space can be eroded and a more permanent and cost-effective workplace solution is required.

“Staged office space allows for these tenants to locate in a traditional office space without the hassle, capital investment and risk of building out their own space. It acts as the perfect next step for companies that grow out of their co-working phase.”