Older apartment buildings need to be treated differently from new properties when it comes to buying, selling and maintainance, and a panel of key players discussed their strategies at the Sept. 6 Canadian Apartment Investment Conference at the Metro Toronto Convention Centre. 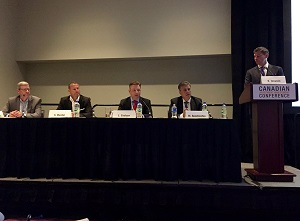 More than 80 per cent of apartment buildings in Canada are considered older assets, according to panel moderator and Colliers International managing director Karl Innanen. CBRE Canada national apartment group executive vice-president Lance Coulson said that number increases to 95 per cent in his hometown of Vancouver.

Starlight Investments invests in and manages multi-family real estate in North America, where it has 24,000 units in Canada and 10,000 in the United States. Executive director of capital improvement and development Mariano Bocchicchio said his firm adds value to its older acquisitions in two ways.

Starlight stabilizes and improves building infrastructure — including boilers, elevators and mechanical systems — when needed in order to reduce service down time and long-term operating costs. It also tries to modernize exteriors and interior common spaces while refurbishing tired suites and creating amenity spaces where possible.

“It’s no longer just putting lipstick on a pig,” said Bocchicchio. “We have to look at things in a very different way and have a strategy.”

Timbercreek Asset Management owns approximately 20,000 units in Canada and 3,000 in the U.S. Senior managing director of asset and risk management Jeff Hutchison said the company looks for properties in good neighbourhoods, since even older or decaying buildings in such areas can still be renovated and repositioned. In addition to making these physical improvements, Timbercreek also looks to upgrade a building’s management and customer service.

Hutchison said many tenants, especially younger ones, look for new technology to be introduced into buildings and their communication with management.

Coulson instructs clients looking to sell a property to think about “curb appeal” and clean up the exterior because potential purchasers may pull up in a car and, if they don’t like the look from the outside, they’ll drive away for good.

Sanford Mandel & Associates Inc. principal Sandy Mandel recommended keeping a building’s boiler room bright and inviting. He said if an owner shows it cares that much about a part of the property tenants don’t see, it must put even more effort into maintaining its suites and amenity areas.

This can inspire confidence in potential purchasers.

Mandel added that some older apartments are renovated so extensively, and repositioned so well, they’ve essentially created a new real estate asset class.

Bocchicchio said older properties can have advantages over newer ones. They usually have larger suites and land footprints and are located in more established neighbourhoods with schools, community centres, parks, libraries and, sometimes, access to public transit, he explained.

Coulson said newer apartment buildings appeal more to private investors because they might not have the capital or value-add platforms of institutional investors. Such properties also shouldn’t need significant capital expenditures for several years. They’re willing to pay a premium if it means less hassle.

Newer apartment buildings are selling with a higher capitalization rate because new owners can create more value through repositioning older buildings, according to Coulson.

“Typically, in new buildings, the rents are all maxed so there’s not much upside.”

Institutional investors typically look to buy apartments with 100 units or more, and the average size in Vancouver is only about 25, so Coulson said smaller firms or high net worth individuals are bigger players when it comes to those properties.

New buildings haven’t been sold in the GTA, so it’s harder to place a price on them, according to Mandel.

Bocchicchio said only certain types of operators can successfully stabilize and add value to older apartments, which can create opportunities for larger companies in smaller cities.

“There aren’t a lot of primary landlords in secondary markets that have scale and mass and that want to be involved in repositioning buildings, because of the complexity of that process.”

“If you’re looking to reposition a product somewhere that doesn’t have a condo market, there can be great opportunities and pent-up demand for the type of product we’re bringing back to the market,” said Hutchison. “In other markets, with more and more people doing renovations, competition does what it does and makes it harder to generate the kinds of returns you want.”

Bocchicchio also believes suites rented by owners in new condominiums can help the purpose-built rental industry by setting a high-water mark for rents. Repositioned apartment buildings can then take advantage of those benchmarks.

“With the current costs of construction and development, as well as land values, most condo investors that are putting their product up for rent need to yield a certain amount because they’ve paid top dollar for it. That’s an added benefit to us when we’re repositioning because the spread can be substantial.”

Tenant turnover has lessened in the last 18 months, as people are reluctant to move in a tight rental market and at a time when buying has become largely unaffordable.

Mandel said turnover rates ranged from 25 to 40 per cent two years ago, depending on the apartment. Now they’re below 20 per cent, with single digits not uncommon in some buildings — especially where rents are furthest below market value.

Buildings with plenty of college and university students and seniors have higher turnovers. Out-of-town students often move back to their parents’ homes during the summer or to other locations after they get jobs post-graduation. Seniors may be forced to move to nursing homes when they become less independent, while others pass away.

Apartment renovations cause spikes in turnover, as they can introduce noise, dirt, water shutdowns and other disruptions that may make tenants look at moving.

“It depends on the market you’re in and what affordability there is in the marketplace and people’s ability to find something similar,” said Hutchison.

“When existing residents start to see a building transformed with regards to curb appeal, interiors and suites that are being renovated, there’s a surprising demand from tenants within the building to move into some of these suites because they consider the building home,” said Bocchicchio.

Starlight has benefited from this trend, since existing tenants moving into renovated suites leave their former units, which can in turn be renovated and rented to new tenants at a higher rate.