The Oliver brings luxury apartments back to Edmonton

The Oliver, Edmonton’s first luxury, purpose-built concrete rental property in more than a decade, will begin welcoming residents this month. 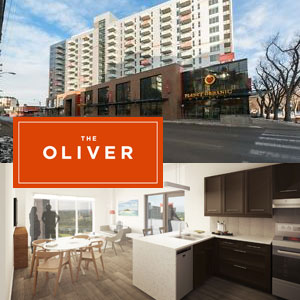 “The economics of building a rental tower have been greatly improved over the past two years, with Canada’s low interest rates and Edmonton’s low vacancy rates being the main catalysts.”

The Oliver is located on Jasper Avenue near 124th Street in the city’s West Oliver neighbourhood. Planet Organic Market recently joined Canadian Western Bank as the building’s podium-level retail tenants to complement the neighbourhood’s nearby amenities, including shopping, transit and recreational facilities.

The building features 207 suites, ranging in size from 360 to 903 square feet, across 10 residential floors. Each one includes open-concept floor plans, a balcony, washer and dryer, and stainless steel appliances. Studios start at $985 a month, one-bedrooms at $1,385 a month and two-bedrooms at $1,785 a month.

“It is expected that the lease-up of the residential component of The Oliver will take approximately 12 months,” said Timm. “The project has achieved a huge amount of interest to date.”

Tenants can take advantage of a lounge, fitness centre and rooftop deck that provides excellent views of the easily accessible downtown core and the nearby River Valley parkland. Heated underground parking and secure bike storage can accommodate residents’ vehicles.

Edmonton hasn’t been hit as hard by the downturn in oil prices as Calgary or Fort McMurray, but Alberta’s overall economy is undeniably in a down cycle.

Renting is popular in uncertain markets

“In an uncertain market, more people rent than buy,” said Timm. “Renting is an attractive option as residents don’t have to take on financial threat and worry.

“In addition, with so many people currently having properties in multiple locations, people are choosing a lifestyle of renting in the city where they work and live and then owning a recreational property where they escape on their weekends and vacations.”

Timm added that by not paying condominium fees or property taxes that condo owners are responsible for, renters can save more than $10,000 a year in after-tax dollars.

The Oliver was designed by the Dialog architectural firm, which was recently honoured for design excellence in two categories at the Canadian Architect Awards of Excellence. It also won the 2015 Canadian Consulting Engineering Award of Excellence for the Edmonton International Airport combined office and control tower.

“ICM believes that The Oliver will have a highly positive influence on the Edmonton purpose-built rental market,” said Timm.

“There are some other great developers building rental-specific projects in the city, and this will only spur growth in the Oliver area and downtown rental marketplace. As more people live downtown, more businesses flourish, and that results in additional businesses that decide to open.”