Toronto’s historic Omni King Edward Hotel will begin restoring its long-neglected Crystal Ballroom next month, less than a year after completing a much bigger renovation of the building. 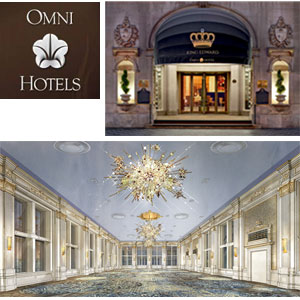 “Right now the ballroom is in a raw state, in the way it was left in the 1970s,” said hotel general manager Christophe Le Chatton. “We are very limited as to what we can do with the space.”

The 5,000-square-foot Crystal Ballroom made its debut in 1922 on the 17th floor of Toronto’s first luxury hotel, which opened in 1903 and underwent $40 million in recent renovations to its guestrooms, meeting rooms, lobby, bar, windows and other areas.

The Crystal Ballroom could accommodate up to 300 people and quickly became a sought-after destination for high-profile galas and elegant events. It remained that way for 50 years, according to Le Chatton, before it was shuttered because it no longer met fire and safety regulations and was cost-prohibitive to renovate.

Limited use in recent years

Le Chatton said the Crystal Ballroom’s use in recent years has been restricted to movie, television and magazine shoots.

The Crystal Ballroom’s restoration will be heavily influenced by its original interior and be done in accordance with Ontario and Toronto heritage standards. Its ornate plaster mouldings, 12-metre ceilings and floor-to-ceiling windows offering panoramic views of the city will remain central features.

The floor of the pre-function space will be finished in mosaic tile. A new permanent bar will be introduced. The Crystal Ballroom carpet will be reminiscent of designs from the early 1920s but rendered in a contemporary fashion. Updated chandeliers and wall sconces will vary from the original, but will include crystal elements. There will also be upgraded amenities and washrooms.

Moncur Design Associates Inc. and Omni Hotels & Resorts are responsible for the new look and design.

Crystal Ballroom will open next year

The Crystal Ballroom is slated to open early next year and it will be rented out to host social events, galas, weddings, fundraisers, banquets, photo and film shoots.

“The goal is to bring back what used to be the grand ballroom of the city where so many memories were shared,” said Le Chatton. “We want to be the place where people want to get married and celebrate special events because it’s an amazing space.”

The Crystal Ballroom renovations are expected to cost $6.5 million, which is $500,000 more than what it took to build the entire hotel back in the day.

Le Chatton explained that the Crystal Ballroom renovation expense figure isn’t as outrageous as some people might think, since rooms cost $11 a night to rent when the King Edward was built and have increased by approximately 2,200 per cent to an average of $250 per night. If you apply that 2,200 per cent increase to the original $6 million building cost, it works out to $132 million, which is about how much Le Chatton estimated it would cost to build the hotel now.

The 2013 to 2015 King Edward renovations are paying off, as Le Chatton said occupancy rates are up by about 20 per cent and the hotel is able to charge much more for its rooms.

“The main impact was on the rates because the product was looking a bit tired. With all of the new five-star hotels coming into the city, people still loved us but wanted a product with more modern amenities.

“We had lost a bit of traction. With the renovations, we’ve seen a major turnaround and our business has gone north of 30 per cent with rates.”

Omni Hotels & Resorts took over partial ownership of the King Edward in August 2013 and has been managing and operating it since then. The company fully acquired the hotel last November.