Ontario’s Fair Housing Plan got a rough ride during the May 3 Land & Development Conference at the Metro Toronto Convention Centre. 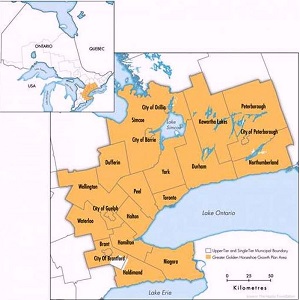 A Government of Ontario graphic illustrating the Greater Golden Horseshoe Area. Expanded rent control and a foreign buyer tax (in the GGHA) are both contained in the Ontario Fair Housing Plan.

But The Rockport Group principal Daniel Winberg said he doesn’t think Ontario’s 16-point plan will accomplish what it sets out to do. He’s not happy about it, and he’s not alone.

“I’m hoping this plan will have some refinement and that the government will meet with industry leaders,” said Winberg.

Rockport is constructing two purpose-built rental apartment buildings in Toronto, Montgomery Square and Weston Common, which will go on the market next year. Winberg doesn’t like the expanded rent control included in the Fair Housing Plan but said his company would have gone ahead with the developments even if the policy had been in place before they broke ground because it’s so bullish on Toronto for the long term.

Prices will rise as long as demand outpaces supply

Canderel executive vice-president Ben Rogowski believes the housing plan will have the opposite effect on condominium sales than the government envisions. He expects prices will keep rising as long as demand continues to far outpace supply.

Rogowski would have preferred measures in the plan to free up much more land for development and to streamline the zoning process.

The plan introduced a targeted $125-million, five-year program to further encourage the construction of new rental apartment buildings by rebating a portion of development charges.

“That’s a drop in the bucket,” said Rogowski. “Let’s talk about increasing supply and adding more product to our market, and then the market will take care of everything else.”

Cranson Capital founder and president Devon Cranson was among those who noted different levels of government seem to have conflicting policy goals.

Cranson believes it’s hypocritical to implement a new 15 per cent non-resident speculation tax on homes in the Greater Golden Horseshoe purchased by individuals who aren’t citizens or permanent residents of Canada, or by foreign corporations, while encouraging deep-pocketed foreign companies to compete against Canadian firms for development sites and buildings.

“Our federal government is saying it wants to bring 400,000 people to Canada, yet our provincial and municipal governments are saying something different and pandering to their local constituents,” added Menkes, the high-rise residential VP of Menkes Developments Ltd.

Cranson pointed out that housing starts took a big hit in 2013 and 2014 due to new federal government policies on mortgage amortization implemented in an attempt to decelerate the market. The measures instead resulted in banks cutting back on lending.

Since it can take four years to complete a high-rise building, those measures are now resulting in a lack of new product in the market, a trend expected to continue through next year.