Batchawana Island, one of North America’s largest privately owned islands, is for sale. The undev...

Batchawana Island, one of North America’s largest privately owned islands, is for sale. 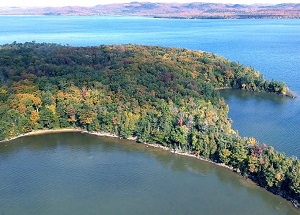 The undeveloped 5,200-acre island, located about 45 kilometres north of Sault Ste. Marie, Ont. in Lake Superior, is being marketed by Colliers Canada for $14.95 million.

“If somebody wants a really unique property, this is their opportunity,” said Vancouver-based Mark Lester, Colliers’ senior vice-president of unique properties.

Batchawana Island is in Batchawana Bay and is separated from the mainland by a 410-metre-wide deep-water channel at its closest point. It offers a sandy beach on its south side.

American Joseph Acheson purchased Batchawana Island from a Swiss forestry management company about 20 years ago. Its hardwood forest was selectively logged in the 1960s, and the trees were left to regenerate. The forest isn’t protected and could again be used for logging.

There are rumours that notorious gangster Al Capone used Batchawana Island as a hideout in the 1920s.

A Belgian investment group which owned about half the island and more property around Batchawana Bay had plans to build a complex that would include a golf course, condominiums and a hotel in the mid-1970s. That ended when economic conditions took a downturn.

Last year, Acheson proposed to develop a members-only sports resort which would include 20 rooms and focus on such activities as archery, clay shooting, hunting for big and small game, fishing, kayaking and cross-country skiing. There were also plans for two docks and an airplane landing strip.

The proposal, however, fell through.

“He (Acheson) just found that it was too big for him to bite off,” said Lester. “He just doesn’t have the expertise himself.”

While Batchawana Island’s timber resources have significant value, it’s also zoned for a variety of residential, recreational and other uses. Lester believes potential purchasers could include:

* those who want it strictly as a land investment;
* high-net-worth individuals interested in acquiring it for personal use;
* a person or company looking to develop a resort, a hunting and fishing lodge, or residences.

The provincial government had considered acquiring Batchawana Island as parkland in the late 1970s before abandoning the idea in 1981. Lester said it would still make an outstanding park, but he doesn’t know if there would be any interest in the island from the Ontario or Canadian governments.

Batchawana Island had been previously put on the market twice this decade, being offered for $21.5 million through Remo Valente Real Estate in 2010 and more recently through Vladi Private Islands for $16.25 million.