Ontario Power Generation has sold the former Lakeview Generating Station, a 177-acre waterfront development site in the City of Mississauga just west of Toronto, to a consortium of developers for $275 million. 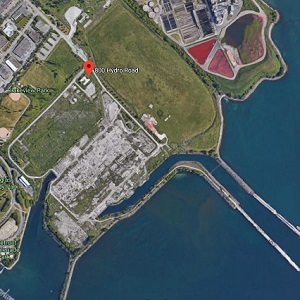 The former OPG Lakeview Generating Station site in Mississauga has been sold to a consortium of developers. (Google Maps image)

OPG says the 800 Hydro Road site, formerly home to a large coal-fired hydro plant, was purchased by a group called Lakeview Community Partners Limited. The brownfield site along the northern shore of Lake Ontario will be redeveloped into a mixed-use community including parkland.

“We look forward to working together with all stakeholders, including the local community, the City of Mississauga, the Region of Peel, the province and conservation authority to honour the late Councillor Jim Tovey’s vision for a vibrant, sustainable, and connected community – an icon on the shores of Lake Ontario in Mississauga.”

The release says the province, OPG and the City of Mississauga have developed a vision for the site called the Inspiration Lakeview Master Plan. The plan calls for “a mixed-use community with a variety of residential building types, parkland, cultural and employment uses, with buildings featuring environmentally sustainable designs.”

Mississauga South MPP Charles Sousa has said up to 15,000-20,000 people could ultimately call the property home.

The site features 2.6 kilometres of waterfront shoreline, including a pier, according to marketing materials related to the sale. Jones Lang Lasalle, the broker in the bidding process, said the site offered the successful bidder the “ability to control one of the last remaining significant land parcels in the GTA able to facilitate a multi-phased development.”

JLL said the city is already spearheading an Official Plan Amendment process for the site.

A launch event, hosted by OPG and the Government of Ontario, is planned for April 10 to celebrate the future of the Lakeview lands. It will take place at the Carmen Corbasson Community Centre, 1399 Cawthra Road at 6 p.m.

The conditions of sale include a requirement that 67 acres of waterfront land will be remediated and transferred to the City of Mississauga. The net proceeds from the sale of Lakeview lands will be transferred to Ontario’s Trillium Trust to fund transit, transportation and other infrastructure projects across the province.

Jones Lasalle Lang was the broker retained by OPG to handle the sale, while Infrastructure Ontario was brought on as a strategic advisor.

Lakeview was one of five OPG coal-fired power plants which were shut down to decrease greenhouse gas emissions resulting from the creation of electricity in Ontario. It was in operation from 1962 through 2005. The plant was demolished and the land underwent remediation from 2006 through 2011.

Four of the sites have now transitioned to new uses, including; a new solar farm in development at Nanticoke GS; conversions to renewable biomass fuel at Thunder Bay GS and Atikokan GS.

“We’re pleased the province has made this project a priority,” said Mississauga mayor Bonnie Crombie in the release.

“This is great news for the City of Mississauga and is another step toward realizing the vision of a renewed and redefined waterfront in our city. Mississauga is ready to work with the consortium to build a master-planned community that will become a destination for tourism, business and innovation . . .”