Ottawa builder David Choo: ‘I am an entrepreneur’

David Choo didn’t set out to become one of Ottawa’s largest, most highly visible developers. 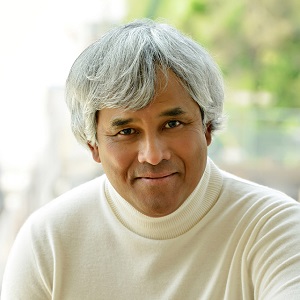 However, even as a child he was inquisitive and driven. A born entrepreneur, he likes to say.

“I’ve built whatever businesses I have from scratch, right here in Ottawa. Essentially I am an entrepreneur,” Choo said during an interview in the suburban office which houses his Choo Communities companies (Ashcroft Homes, Envie student residences and the Alavida Lifestyles seniors brand).

“If you get to know me, you know I am a very passionate guy. Everything I do is with great passion. That starts, probably, as a kid.”

The man whose company has built large urban communities such as Central Park in Ottawa’s west end, and most recently Q West in trendy Westboro, ran his first business in the family home in Guyana. He was eight years old.

Choo remembers getting “pocket money” from his parents and using it to buy chickens. He bought feed and raised the birds until they were ready to be sold – to his mom. For a profit.

“How could you sell the chickens back to your mom, right? My mom was a great sponsor. I didn’t find anything wrong with that because if I couldn’t sell it, then I didn’t have any money to buy other chickens,” he recalled. “That is the first time I realized I could take a certain number of dollars, and in some period of time, make a profit from it.”

From math to tech to real estate

In 1971 at age 18, he arrived in Canada to attend Carleton University and pursue a degree in his life-long passion, mathematics. “I’ve been here ever since,” he said, though his introduction to real estate came many years later.

First came a successful career in Ottawa’s then-emerging hi-tech industry where he put his mathematics, engineering and MBA degrees to use. Choo founded CML technologies, creating communications networks in specialty areas such as air traffic control and 911 emergency services, then sold it in the early 1990s.

“I took a little bit of the money that I had and decided I was going to invest in some land. So we invested, we bought some land where the builder went bankrupt,” he said. “That was the early ’90s and the recession.”

Choo developed the site himself and has never looked back.

“At the time I was 30 years old and I realized it was too young to retire, and I also realized I am not a passive investor.” Not by a long shot; he was soon dreaming much larger.

“In ’96, I believe, I bought Central Park which was like, this massive project,” he said of the property which is now home to about 6,000 residents, plus retail and commercial space.  “That’s what I’ve been doing ever since. Now I’m building student housing, seniors housing, luxury housing, condos . . .”

At the time, the purchase was considered a gamble by some observers. Not by Choo.

“I was already in business. I had gone through scale in the hi-tech business. I already had acquired the great self- awareness of who I was, what I could do. So when people said, ‘That crazy guy has bought Central Park,’ to me it wasn’t,” he said, chuckling. “I don’t regard that I take risks, but others look at what I do and say, ‘He’s a great risk-taker.’ ”

To Choo, ever the mathematician, it was a “manageable risk.”

“When I bought Central Park, I paid a lot more money than anyone else was going to, and everybody thought I was going to get in trouble buying it. Today, everybody looks back and says, ‘Wow that was lucky’,” Choo said. “So, you can say as well that I was lucky in Westboro (with Q West).

“But, like a lot of good golfers say, the harder I practise, the luckier I get.”

Two decades later, he’s planning the final phase at Central Park, designed to resemble the type of development he’s constructed at Q West, a nine-building residential and mixed-use site which is also at its final building phase. Both are master-planned, mixed-use communities designed to provide most of the amenities their residents need easy access to.

“Central Park, when it’s all finished, will be a community of about 8,000 people and it will probably be the largest urban, mixed-use community in Ottawa’s history,” Choo said. “Those are big, master-planned communities that are fun to do.

Sometimes it also involves controversy. Choo has strong ideas about what he wants to build – and this can sometimes cause conflict with area residents or city planners. At Q West for example, the 150-year-old former Sisters of the Visitation convent building at the centre of the development site has a heritage designation.

After spending “hundreds of thousands of dollars” trying to design an acceptable adaptive reuse of the building, Choo says he offered it back to the city for $1 – an offer that was refused. “Everybody and their brother wants to tell me what I ought to do with (the convent), but nobody is providing any financial assistance to do this.”

It’s taken years of negotiation to create an acceptable plan to restore most of the structure, which will be gutted, refurbished with community and commercial uses, then attached to a mixed-use condo tower.

Common link to his passions

From Choo’s perspective, it has been frustrating, but it’s part of the challenge associated with major developments. And Choo loves a challenge.

“Whether it’s art, mathematics, hi-tech, or buildings – they all have a connectivity. It’s all a creative process and math has a lovely aspect that you are constantly searching, and solving problems,” he said. “There are creative ways of solving them and there are great insights.

“One has to struggle for a period of time, only to find a glimmer of hope of a solution, and you spend a great amount of time pursuing those solutions (which) sometimes end up in a great big bang. Or not.”

Having created that “great big bang” at both Central Park and Q West, Choo is looking ahead. The company is:  building student housing near Ottawa University and in the city’s Little Italy; planning more student housing in London and Kingston; and has pending developments in Ottawa’s Centretown and west of the Central Experimental Farm — effectively book-ending the Central Park site.

Choo likes to keep about four high-rise or other significant projects on the go.

“Clinically to describe what I do, it’s probably an obsession,” he said. “I can’t help doing what I do. I am compelled when I have an idea, to see the idea through.”