Large building owners might soon have a new option to both lower electricity costs and reduce the space required for electrical infrastructure in their properties. 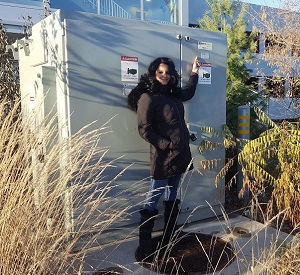 Alexa Baseeso of Power Systems Technology stands in front of one of the company’s MiniSub systems. The MiniSub contains all the units often contained in much larger “vaults” in large commercial or industrial buildings; voltage switching gear and a power transformer. (Image courtesy Power Systems)

Power Systems Technology in Ottawa is seeking a location to pilot its latest clean tech power solution, which combines two pieces of the company’s existing technology. The Green Distributed Power System (Green DPS) has the potential to cut building energy costs significantly by reducing wastage when electrical current is “stepped down” — but only if Power Systems can find a site to pilot it.

So far, the company is finding that to be a major challenge.

Power Systems is an equipment manufacturer which has been in business for 18 years. Founded by company president Laurie Ferris, who invented the original MiniSub technology, Power Systems specializes in electrical distribution technology for commercial, residential and industrial buildings.

“Buildings all over the world have been using the same approach when it comes to power.” said Baseeso.

“That’s been reliable for about 100 years. Not much has advanced when it comes to the traditional way of powering buildings,” said Baseeso, “The issue we have accepted with the traditional powering infrastructure is that you lose energy in the process of delivering energy.”

Power Systems’ existing MiniSub and its newer MicroSub substations can be purchased as standalone products to convert and distribute power in a building. MiniSubs in particular have been in use in several countries, including at Carleton University in Ottawa.

Now, Power Systems has combined the two pieces of substation technology into the Green DPS.

The ideal test site would have extensive power needs. According to Baseeso, the type of power required in a building is a larger factor than the size of the structure in determining if the Green DPS is a viable option.

“A grocery store isn’t a condo or high rise, but it has large demands for electric power because of all the refrigerators. Same thing with a data centre, you have all these machines that require constant energy,” she explained.

This method consumes more materials and requires electricity to take more steps before it reaches its end user, with energy loss at each point of transfer.

Green DPS would replace equipment in the utility vault with a single MiniSub, while one MicroSub every few floors would each replace multiple transformers. Baseeso said it is easy to retrofit and significantly reduces the space required by traditional equipment — square footage which could then be monetized.

Power Systems says this results in 10-15 per cent energy savings.

For owners of large buildings, finding ways to lower power consumption is a big factor in reducing the overall cost of operations. Many building energy reduction programs currently focus on reducing power usage, whereas this system reduces power wastage.

MiniSubs and MicroSubs are currently sold on their own, but Power Systems has, so far, run into a series of roadblocks in its attempts to find a pilot site for the integrated Green DPS system.

“We have to change people’s attitudes and perceptions on how to power buildings and that starts with procurement,” she said. “People are concerned about what the solution is going to cost them right now. Right now, our product is going to be a little more expensive because it’s more on the side of maintaining a medium voltage, so the maintenance is different.

“But it pays for itself and is actually cheaper over its lifetime.”

There are several other roadblocks:

* Trying to get the technology into the hands of companies that provide electricity has been tough. As a seller of electricity, these firms face a conflict of interest in adopting and promoting devices that lower the amount or their product being sent to customers, Baseeso said. Some also offer incentives to large power users.

* Accessing government funding is contingent on having a demo site to conduct tests. But without proof of concept, getting an early adopter to become a test site is difficult. It’s the classic “chicken and egg” conundrum.

* Progress on clean tech has also been hindered by poor communication between private companies and institutions which govern electrical technology such as the Ontario Energy Board or the Independent Electricity System Operator, she said.

Regardless of the obstacles, Power Systems Technologies is continuing to innovate. It has also developed the EV Power Hub, for which a patent is pending, which works with the Green DPS system to charge electric cars.

“Think about it: If we’re cutting out all these losses at the infrastructure level, that’s decreasing demand on the grid which is desperately needed when we’re going to be increasing the demand with all these EVs,” said Baseeso.