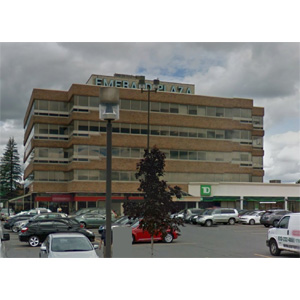 “Parties to the deal would prefer us not releasing detail as to who they are,” said Primecorp chief operating officer and founding and managing partner Sam Firestone. “That should become public knowledge in the near future, however.”

Aaida Oakley, who brokered the transaction between the two private companies with the assistance of Johanna Oakley, elaborated on it further.

“The seller is moving towards residential rather than commercial and the buyer is a private company that owns quite a bit of real estate in the city. They’ve got a big property management group that looks after their properties and wanted to expand. They’ve been looking for a while.”

Emerald Plaza is located on about 10 acres along the east side of Merivale Road, one of the National Capital Region’s busiest retail shopping corridors. It features a five-storey, 56,823-square-foot office component and a 95,074-square-foot retail strip mall anchored by longstanding tenants including a TD Canada Trust branch, Buffet Yang Ming, PetSmart and Alexanian Flooring Limited.

All of the retail space in Emerald Plaza is leased while the office building, which includes underground parking, has a vacancy rate of approximately 30 per cent. The search for new office tenants is only beginning since the deal closed on Monday.

There’s no room to add any more buildings to the property, according to Oakley, and she doesn’t anticipate any redevelopment or major renovations.

“They may do something with the offices if it’s required to help lease them, but the property’s in very good condition,” she said. “It’s been well-maintained.”

Oakley expects a Movati Athletic facility to open behind Emerald Plaza in a former Target store that’s being renovated.

While Oakley started working on the deal during what were supposed to be her Christmas holidays, she didn’t mind because she said both parties were a pleasure to work with.

“Everything was in order when the offer went in. The seller was very organized so it was an easy deal to do.”

Primecorp has completed transactions worth more than $6 billion in more than 55 Canadian cities since its inception in 1998. It has offices in Ottawa, Toronto, Gatineau and Montreal.