To help it compete with an influx of new downtown Toronto office towers, and attract a new breed... 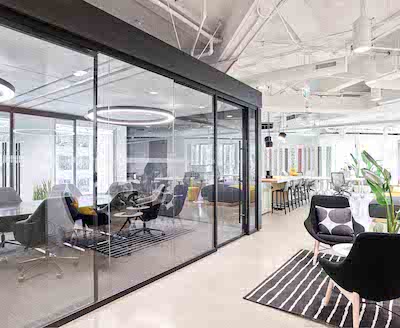 To help it compete with an influx of new downtown Toronto office towers, and attract a new breed of tenants to the Royal Bank Plaza, Oxford Properties created the Workplace Innovation Challenge design competition.

Oxford office leasing vice-president John Peets said with the new towers garnering so much attention, the owners of legacy buildings have had to respond by spending millions of dollars on technological and aesthetic upgrades. Such is the case with the 41-year-old Royal Bank Plaza at 200 Bay St., and the innovation challenge.

Four design and construction teams Oxford had previously worked with were each invited to plan and build out a quadrant of innovative office space in the 17,500-square-foot 10th floor of Royal Bank Plaza’s north tower.

Oxford fronted the capital for the challenge. The only limit placed on the designers was a budget of $120 per square foot.

“The design community embraced it and created spaces that will help us attract the tech companies and creative class companies that wouldn’t consider 200 Bay St. as its first choice because of its institutional look and feel,” Peets told RENX.

“It was always perceived to be a bank tower and what we wanted to do was transform the inside so that we could attract tomorrow’s tenant.”

Efficiency, flexibility, aesthetics, sustainability and wellness categories accounted for 75 per cent of the scores, with the remaining 25 per cent allotted to meeting the budget, finishing on time, collaboration with the property management team and quality control.

The team of Connect Resource Managers and Planners Inc. and The Jesslin Group received the top score, bragging rights and a contract to design a 25,000-square-foot space for Oxford in the future.

Entries emphasizing sustainability and wellness stood out, but Peets said the winning design was largely chosen on the basis of its attention to flexibility.

“Business is changing so rapidly that having the ability to transform your space, so you don’t have to relocate again, is a major benefit.”

Oxford combines districts with The Canteen

All four designs, however, can now be leased as part of what has been named Districts on 10.

Peets said the goal is to assist “the small- to medium-sized user, primarily because they’re not part of large organizations that have big real estate divisions and things like that that can create the workplace that aligns with whatever their culture is.”

Districts on 10 is part of a large block of space that became available last fall through the merger of two large law firms that needed to find a new home.

The four newly designed districts join The Canteen, a 1,500-square-foot space on the 10th floor that Peets said “has a cool café vibe to it based on the success of the flexible office space market, where there are shared services and people commune around each other at a cappuccino maker or hang out and work or take a break from work.

“We wanted to create a lounge environment that would invite a different type of work experience. At the end of the day, this is about people wanting a great experience at work.”

Oxford hopes to bring new companies into Royal Bank Plaza so they can grow and expand their footprint in the company’s portfolio over time.

All brokers have access to the marketing materials to promote the four districts and Oxford is directly communicating with several Toronto technology and startup companies.

Peets expects to have the space occupied within six months.

“We’re using this as a test pilot and will do lease terms as short as a year and as long as five years. If you come in and test-drive it for a year and like it or love it, you can stay longer.

“We don’t want to saddle a company that’s not certain of its growth plans with a three- or five-year lease. We think that’s going to appeal to a lot of these users.”

Peets believes the Workplace Innovation Challenge can easily be scaled and incorporated into other buildings in other markets.

Oxford would like to target a single user for the next one and has asked the winning design team to look at creating a full floor that would meet the needs of a large institutional firm and could be rolled out and built quickly.

Royal Bank Plaza, comprised of a 41-storey north tower and a 26-storey south tower connected by an atrium, is connected to the underground PATH system and is across the street from Union Station.

It was the first office bank tower in Canada to obtain a LEED-EB Platinum certification through a number of energy savings and cost-effective measures.

Royal Bank of Canada’s main Toronto branch is located in the building and Peets said the bank is spending millions of dollars on renovating it to “create a new customer experience.”

Oxford, the real estate investment arm of the OMERS pension plan that owns and manages more than 50 million square feet of space across Canada, is renovating the lobbies of some of its downtown Toronto office buildings, including Royal Bank Plaza.

Peets said it’s spending “significant capital on creating welcoming environments for the community and for the users of the space above.”