With the beleaguered Calgary downtown office market continuing to struggle with exorbitant vacanc... 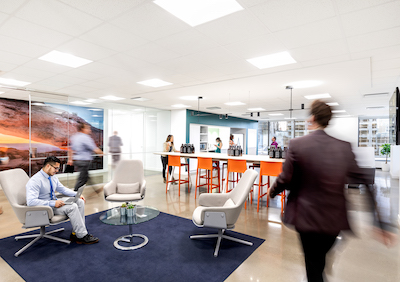 The initiative has been working. Oxford’s vacancy rate in its 4.5 million square feet of central business district office space is eight per cent – compared to an industry-wide vacancy hovering around 25 per cent.

OxWorx, a flexible office solution for tenants, began at Oxford’s Bow Valley Square last year. On March 1, it rolled out to the Millennium Tower, with further expansions also being considered.

“We just had a real success story in Bow Valley after we piloted and watched this concept,” said David Routledge, Oxford’s vice-president of real estate management west. “As we looked into our portfolio in the Eau Claire area, we just decided we would replicate and tailor it to this part of the downtown, and we kicked it off in Millennium Tower.”

Millennium Tower is about 436,000 feet. Bow Valley Square is about 1.4 million square feet.

Routledge said Oxworx offers all types of businesses a variety of customizable leasing options, making it possible for international corporations and local startups alike to thrive side by side in the heart of the city.

“The intent is to respond to the market. It is a flexible office solution in terms of providing our customers with shorter-term leases, varying sizes of office options,” Routledge told RENX. “The market in Calgary is changing in many ways. The energy industry has its challenges but we’re also experiencing good activity amongst smaller companies. Some are startups, some are professional firms, some are financial services firms.

“The thing that’s very interesting in OxWorx is some of the companies that are taking space with us are larger entities with a small presence in Calgary. We’re really just trying to respond to the market and provide a flexible office solution for people.”

Bow Valley Square has 21 suites on two floors for OxWorx. In Millennium Tower, there are five suites which occupy about half a floor.

“A new program for leasing” 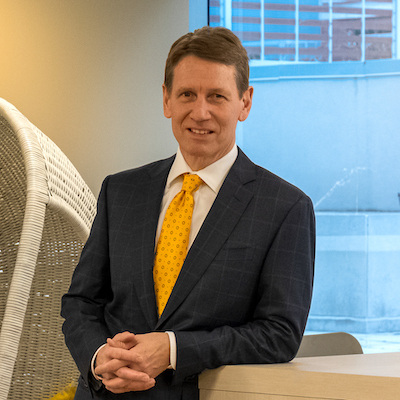 “We’ve developed kind of a new program for leasing these smaller suites. What it is in a nutshell is, we’re leasing-flexible office premises on shorter-term leases. We typically look for a minimum of a three-month commitment and even more significantly is we’ve gone away from a traditional office lease and we’ve got a page-and-a-half licensing agreement, which is kind of all-encompassed in a six-page agreement,” said Routledge.

“So for a tenant looking for space it just creates a very flexible, easy-to-understand document. We also take payment on a credit card or ETF. We make all the transactional process very simple and straightforward and we’ve stripped away all the complexity that’s typically involved in a conventional office lease.

“We’ve made it very simple for people to move in quickly, get into business and our rent is kind of an all-inclusive number as well. We don’t have a bunch of fees for services in this space.”

A recent report by commercial real estate firm CBRE said Calgary’s downtown office vacancy rate is expected to rise to 29.1 per cent this year from 27.2 per cent in 2019.

“Stakeholders continue to look for solutions to the historically high vacancy rates in downtown Calgary. The repurposing of empty offices into other uses has been the most widely discussed solution; however, challenges with this strategy remain,” said the report.

“These include non-viable floorplates, complex construction and a lack of 100 per cent vacant properties. While few candidate buildings may proceed, the number of viable conversions is limited and will only have a minor impact on the 11.5 million square feet of vacant space downtown.”

Routledge said Oxford is very focused on customer service and has spent much time “amenitizing” its buildings with conference facilities and a new concept called The Hub Tenant Lounge.

This sports area comes complete with foosball, ping pong, a pool table and gaming areas; a collaboration space with board games, cable TV and events for customers (including weekly coffee, wine and beer socials); and an unplugged zone for customers to unwind in a peaceful, soundproof library space.

“We’re just finding that by responding to the market in Calgary and investing in our buildings with new ideas . . . we’re getting really strong traction in the market. Overall we did about 500,000 square feet of new and renewal leasing in Calgary last year,” he said.

“And in Q1, we’re probably going to do about 75,000 square feet in new leasing in Calgary. We’re having good results in Calgary in spite of the challenges that are here.”

Does Routledge foresee the unique OxWorx project being rolled out to other Oxford downtown properties?

“It will be demand-driven. (It’s) hard to say at this point. We want to see how the marketplace reacts to it. We started it with Bow Valley with one floor and then expanded from there. We’ll go through the same sort of program at Millennium Tower,” he explained.

EDITOR’S NOTE: This story was updated to correct the number of suites available at Millennium Tower. Incorrect information had been provided by Oxford.