Construction has begun on Ivanhoé Cambridge‘s 1.1-million-square-foot Duo high-rise tower project in Paris, with its developer secure in the fact all of its office space has already been leased. 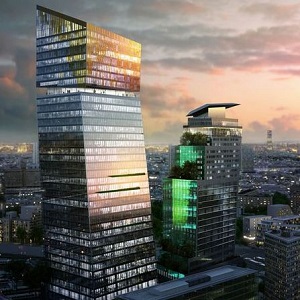 Set for completion in 2021, the mixed-use project in the 13th arrondissement of Paris consists of 27- and 39-storey office towers, a 139-room hotel, retail space, public gardens, a sky bar and an auditorium.

The 969,000 square feet of office space in the towers has been leased by Natixis, the financing, insurance, management and financial services banking arm of Groupe BPCE, France’s second-largest banking group. About 6,000 Natixis employees currently scattered in several buildings will work in the Duo towers.

“Usually in France you don’t have the ability to have such a lease four years in advance,” said Marie-Ève Raux, director, development and project management at Ivanhoé Cambridge in Paris. “So we are very proud because we think it’s because of our vision of future office spaces.”

Raux would not disclose Duo’s cost nor the duration of the Natixis lease.

Duo is situated at the edge of the Paris Rive Gauche development zone, an area previously dotted with docks, industry and rail yards. It’s now a mixed-use area.

Its architect is Jean Nouvel, who has designed a number of buildings around the world.

The two towers have a slight incline which “is like two people communicating together, dancers dancing together,” Raux says. Reflections from train lights and car headlights and taillights will be reflected on the towers’ façades.

Aside from having the LEED Platinum certification, Duo will represent the first office towers in France to be registered for the WELL building standard, which involves employees’ comfort, health and well-being.

The office floors can be partitioned very easily and the lobby area “will be a large meeting place where people can have informal meetings,” Raux says.

There is a lot of demand “for high-quality and innovative office space in Paris,” she says. “If you can provide it, you will find the right tenant.”

There will be a 24,000-square-foot area for bicycle parking – sufficient to house about 600 bicycles – as well as showers for cyclists. “If you look at developments in London, they’re using lots of bicycles. We think it will be an attractive point for Duo as well.”

Duo will also be served by subway, train and tramway lines.

There will also be a bar and tree-laden garden on the top floor of the smaller tower that will afford excellent views of the Eiffel Tower.

Negotiations are underway with a hotel chain for Duo, though Raux said it’s too early to divulge the name. “We want the hotel and restaurants to be a destination and I think we’ll manage to do it.”

Raux says Duo will be an innovative and environmentally-friendly workspace.

“We really believe in this development. It shows our ability to have a strong relationship with the city (of Paris),” she says. “It will have the ability to enhance the attractiveness of Paris.”