Partners Real Estate Investment Trust (PAR.UN-T) has put a “for sale” sign on 11 of its 34 properties, all of them in Western Canada. 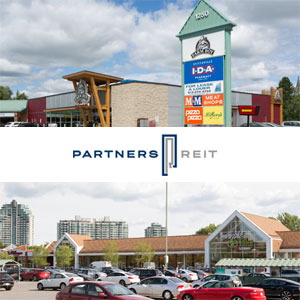 The trust said Wednesday morning it has retained BMO Capital Markets to broker the “possible” sale of the properties in British Columbia, Alberta and Manitoba. Partners said no sale agreements have yet been entered into, and it will “only sell properties where it believes it can obtain fair value.”

All 11 of Partners’ Western properties are on the block. Partners also owns 23 properties in Ontario and Quebec, according to its website.

The portfolio focuses on retail and mixed-use community and neighbourhood shopping centres in both primary and secondary markets. Its current portfolio comprises about 2.3 million square feet of leasable space.

In Western Canada, Partners’ largest properties are the 106,327-square-foot Mariner Square in Campbell River, B.C.; the 68,809-square-foot Evergreen Shopping Centre in Sooke, B.C.; and the 64,539-square-foot Manning Crossing in Edmonton.

All of Partners’ Western properties are 100 per cent occupied, according to September 2017 stats on the company’s website.

Proceeds of any sales will be used to reduce debt and fund capital investments in Partners’ remaining properties, the trust says. Its board of directors will consider next steps when it knows how many of the 11 properties sell, and at what prices.

The REIT’s shares have been trading on the TSX at prices that “significantly discount the appraised fair value of its properties,” according to Wednesday’s release. The stock was at $2.96 in early Wednesday trading — well down from its 2016 and 2017 highs in the mid $3 range.

The REIT also announced it will release its 2017 earnings after the close of markets on March 28. Partners will hold its investors’ conference call on March 29 to discuss the results.

The trust recently announced the departure of chief operating officer Paul Harrs, who led Partners’ transformation from an externally managed model to internal management He had joined Partners in January 2016.

At the same time, Partners announced a reorganization of its management and operations designed to reduce costs while maintaining tenant service levels. Partners said it will realize annual savings of about $800,000 after the changes are implemented.

The company is proposing a major redevelopment of its Cornwall Square shopping mall in Cornwall, Ont. As reported in the Cornwall Standard-Freeholder, Partners proposes to demolish the existing 250,000-square-foot mall and construct a six- to eight-storey mixed-use development featuring a mix of retail and rental apartments.

That project remains in the planning stages.

In June, Partners announced the sale of the Thunder Centre power centre in Thunder Bay, Ont., for $39.75 million. The trust had purchased the 168,087-square-foot retail centre in 2012. It contains two big box stores and five multi-tenant retail strips.

RENX has reached out to Partners for further information. We will update this story if more details become available.