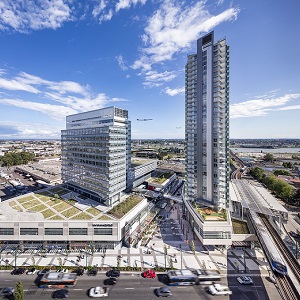 The Marine Gateway mixed-use development in Vancouver is one of two Canadian winners of an ULI global Award for Excellence. (Rendering courtesy Marine Gateway / Perkins+Will Vancouver)

The multi-tower project by Vancouver-based PCI Developments opened at the end of 2015. It’s one of two Canadian winners among the 13 recipients of the 2017-2018 global award. The other is the West Don Lands project in Toronto (watch for our profile of that development, which we will publish on Thursday).

“We’re very pleased,” PCI Developments president Andrew Grant told RENX in an interview on Thursday. He said the site previously had no housing and only 60 jobs, while the surrounding area lacked retail options.

The complex, which threads into the Canada Line station, also has a movie theatre, restaurants and shops and is connected to a major bus loop.

The ULI Awards for Excellence was established in 1979. It recognizes the development process of a project, including design, leadership, community contributions, innovations, public/private partnerships, environmental protection and enhancement, response to societal needs and financial success.

“Great cities are made of great places that make the urban experience easy and enjoyable,” said ULI Global chief executive officer Patrick Phillips in a release.

“These projects reflect the highest standards of design, construction, economics, planning, and management. But most important, they are improving people’s quality of life.”

The site also includes an 260,000-square-foot office tower which is 60 per cent leased, Grant said.

Marine Gateway helped to showcase how high-density, mixed-use development at a transit hub could redefine a neighbourhood, Grant said.

Those levels would likely climb once the office tower fills up, Grant said.

“The retail component was really important to us,” he said. “We thought the local community was underserved by retail and that this was an opportunity to create a neighbourhood centre.”

Among the retail tenants are T&T Supermarket, Shoppers Drug Mart, a medical clinic, a pub and several mainstream restaurant and service brands.

Up next: Project “similar to Marine Gateway”

In hindsight, the project should have been even larger, Grant said.

“It proved the depth of demand, and although the buildings are high-rises, I think it could have taken more density and the fact that it’s right on transit, would have made that very appropriate,” he said.

Grant said PCI is now working toward a “complimentary” project next to Marine Gateway at the current site of a car dealership. “That will be coming soon,” he said, calling it “similar to Marine Gateway.”

PCI will also start construction on King George Hub in the spring. Like Marine Gateway, the project will transform an under-utilized site next to an existing and two future rapid transit stations in Surrey City Centre into a large-scale complex with office, retail and residential uses.