Peer-to-peer real estate services that take brokerages and landlords out of the leasing equation are one of the biggest issues facing building owners these days. 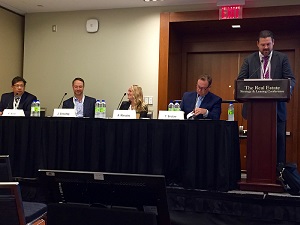 Regus, WeWork and LiquidSpace are examples of companies that provide flexible office rentals, co-working spaces, meeting rooms and services and fill a gap in the marketplace more traditional landlords haven’t really catered to. They often lease space from building owners and then sub-lease it to meet demand.

Editor’s Note: This is Part I of a two-part story on this office panel discussion. Watch for Part II on Thursday.

“We need to figure out what these disruptors are doing and how they’re going to impact us and how we can harness into them properly,” said Colliers International senior vice-president Tim Bristow during a panel at The Real Estate Strategy & Leasing Conference at the Metro Toronto Convention Centre on Sept. 19.

“It’s giving a little more leverage to tenants who have rollovers coming up and are up against their expiries without anywhere to go,” said Oxford Properties Group office leasing director Jeff Sinofsky. “They can go into a WeWork or a Regus temporarily until they figure things out.”

Bristow said WeWork was formerly used solely by entrepreneurs and small businesses, but large companies are now using their offices since many landlords haven’t been willing to offer desired short-term leases.

IBM has taken over an entire WeWork facility in Manhattan, and Dream Office REIT (D.UN-T) leasing director Allison Marsales said such companies are doing so to try to build their office cultures.

“We haven’t figured out the metric to create that culture that IBM, Amazon and Shopify want to create,” said Marsales. “We can supply the space, we can build it out, but we need someone to actually service and build that culture.”

Cushman & Wakefield senior vice-president of office leasing Mike Scace said e-commerce company Shopify, which has become a darling of the Canadian real estate sector, is leveraging its relationship with WeWork to grow its offices around the world.

Shopify employs up to 100 in those spaces before physically leasing space from more traditional landlords, according to Scace.

“People want proof of concept,” said Bristow. “It doesn’t necessarily make sense to go out and convert half-a-million-square-feet of office space to a completely changed workplace when you can actually go to a WeWork and put your marketing department in that environment and study how they work together before you make that investment decision.

“These opportunities allow companies to test themselves in these environments. I think the opportunities for landlords are to create space that’s convertible or pop-up, where you can actually test these theories with your tenants and offer them opportunities to test-market a piece of space.

“You’ll become a partner in their change.”

While Sinofsky said no traditional Canadian landlords have stepped up to take advantage of these opportunities, he’s optimistic it will happen.

“At the end of the day, we still own the real estate, and if we want to do it we can certainly do it. And we can probably do it for a better price.”

CONTINUED: See Part II of this story on Thursday.