When Safe Software launched in 1993, the company’s first cramped office in Surrey, B.C.’s Newton neighbourhood had no windows. 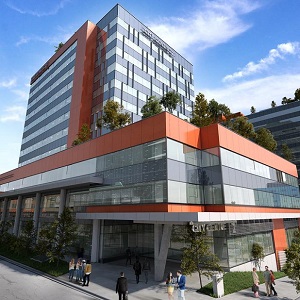 The firm’s second office, while a step up from its original digs, often smelled like the nearby fibreglass factory, joked Don Murray, who is co-founder and president of the enterprise systems and data automation program maker.

But now the burgeoning company of 150, which has topped 20,000 customers in more than 100 countries, is moving up and into the top section of City Centre 2 (CC2), the second-phase building in Surrey’s ambitious Health and Technology District.

The recently completed CC2 building by Surrey-based Lark Group sits next to Surrey Memorial Hospital at the south end of Surrey City Centre.

Murray was among a group of about 200 stakeholders and guests at the CC2 launch ceremony May 10 in a large, yet unfinished third-floor office space in the 12-storey building at 9639 137A Street.

“Expanding our headquarters into the Health and Technology District is a pivotal move for Safe Software that will grow our company to the next level,” Murray said.

CC2 is the latest addition to the emerging cluster of health and technology-focused office and service buildings. CC2 is a 185,000-square-foot LEED-certified GOLD strata building which will sit, eventually, amid seven other buildings.

The district will have more than 1.5 million square feet of work space for lease or sale over the next decade.

The developer, Lark Group, says the District will eventually hold 15,000 workers and will generate $1.1 billion for the provincial economy.

“The third building will start in June, and then, as we get more infrastructure, we expect more interest,” said Lark Group president Larry Fisher. “We’re trying to attract technology and health innovations from around the world,” he told RENX on the sidelines of the launch party.

Fisher said the second building is being sold as strata units — mostly to health and tech start-ups, medical companies and healthcare specialists.

“It gives (the buyers) a great nest egg,” he said, noting Lark will keep about 20 per cent of the units. “We would love to keep it all,” he said, but the secondary lease market in Surrey is also an attractive option.

In business for more than 40 years, Lark Group’s development portfolio includes a mix of multi-family projects, commercial buildings and community infrastructure such as schools, community centres, clinics and hospitals.

They’re mostly active in the Lower Mainland but also have projects in other parts of B.C.

“This has been our home,” Fisher said. “This is where our company has grown up. The city has had its ups and downs, but it’s on such a dynamic path.”

Bruce Ralston, B.C. Minister of Jobs, Trade and Technology, said the district will become a place where professional clinical practices and tech companies will intersect with teaching and research.

“The opening of City Centre 2, in the heart of Surrey’s Health and Technology District, exemplifies our government’s vision for B.C.’s growing tech sector,” he said in a release.

For its part, Safe Software will occupy the top five floors and more than 54,000 square feet of the building, including a 4,000-square-foot cafeteria and a 6,000-square-foot rooftop garden.

Fellow anchor tenant Surrey-based Regent Christian Academy will be adding a campus at the building in the form of an 11,000-square-foot English Language Learning centre. It plans to open this fall.