Business is brisk these days at Plaza Retail REIT (PLZ-UN-T), which has 23 projects under development or redevelopment and has been active selling and acquiring properties in the past couple of months. 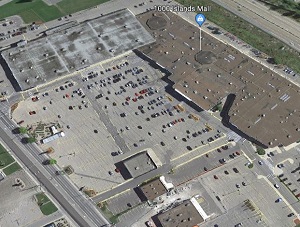 The 1000 Islands Mall in Brockville, Ont., used to be anchored by a Sears Canada store, which now sits vacant. The property has been purchased by Plaza Retail REIT and will be redeveloped. (Google Street View image).

Current development projects will add about 1.82 million square feet to Plaza’s portfolio. And there will be more to come, as Plaza’s purchase of the 1000 Islands Mall property in Brockville, Ont., last week indicates.

“We’ve got a very full pipeline and it continues to get fuller,” said Plaza’s chief financial officer Floriana Cipollone.

Plaza recently sold a 50 per cent, non-managing interest in eight retail properties in New Brunswick and Nova Scotia — in secondary and tertiary markets in Edmundston, Grand Falls and Woodstock, N.B., and Sydney and Yarmouth, N.S., for $17.3 million.

Cipollone said the sales allowed Plaza to recycle capital to “keep fuelling our business, which is really developing and redeveloping.”

On the acquisitions side, the purchase last week of the 1000 Islands Mall property for $14 million is one of two former Sears Canada properties Plaza has scooped up.

Plaza also closed its $3.25-million acquisition of a 50 per cent interest in a former Sears store in Saguenay, Que., with about 100,000 square feet of gross leasable space. This site will also be redeveloped over the next year and a half into a multi-unit retail strip plaza.

The sale of Plaza’s interest in the Atlantic Canada properties “was really just a way to raise capital,” says Cipollone, noting the sites are longstanding, mature and stable income properties for the company.

“The Atlantic syndication is just part of raising capital (and) being able to use those funds to buy things like Saguenay  and a few more businesses and to use that money into higher-yielding developments for us.”

“The Saguenay conversion presents “a unique opportunity for us, taking advantage of a former Sears location,” she says.

It’s located beside the Place du Saguenay, a Sandalwood property with 28 stores and services and is well-situated on Talbot Boulevard at the centre of the region’s busiest commercial area.

Although it has not been decided how many stores will be created out of the former big-box property, “we already have several prospects,” comprising all types of retail, she says.

In a statement, Plaza president and CEO Michael Zakuta said the former Sears Saguenay location “is an important strategic transaction for Plaza. The changing retail landscape in Canada is presenting compelling opportunities for us to leverage Plaza’s core strengths in development and redevelopment to grow the REIT and build value for our unit holders.”

His thoughts on the Brockville acquisition were similar: “This property represents another new opportunity for Plaza to leverage this proven expertise,” he said in a separate statement.

Among its other projects are three properties under development in a 50/50 joint venture with RioCan REIT (REI-UN-T), initiated in 2016. They are redeveloping RioCan-owned shopping centres in Ontario (East Court Mall in Cornwall, Timiskaming Square in New Liskeard) and New Brunswick (Northumberland Square in Miramichi).

Cipollone acknowledged retail is “getting a bad rap” with certain sectors such as fashion suffering and some B-level enclosed malls performing poorly.

“But our business is mostly grocery, pharmacy, value and specialty retail that are doing well,” she says. “Unfortunately, we get tainted with the same brush as everybody else, but I guess everything goes in cycles.”

“In terms of who we have as tenants and what we’re doing, we’re fairly optimistic about our business,” Cipollone says.

Plaza’s total assets are valued at about $1 billion and the REIT’s market capitalization is $431.7 million.

In August, Paul Gardner, partner and portfolio manager at Avenue Investment Management, rated Plaza as a “don’t-buy.” He noted its underlying tenants are vulnerable to technology displacement from Amazon (AMZN-Q): “Most properties are out East. You would not race to go here. They are in the retail headwinds. Insiders are buying and that is a positive, but not enough to hit a buy button.”

However, also that month Andy Nasr, vice-president and investment strategist at Sentry Investment, rated the REIT as a 10-year hold, noting it has a good management team.

“With the 10-year time horizon, you are fine hanging on. They focus on value add, improving the quality of the portfolio as they acquire,” Nasr said.

Although some of its properties are in secondary markets, “the portfolio should demonstrate pretty reasonable cash flow growth.”