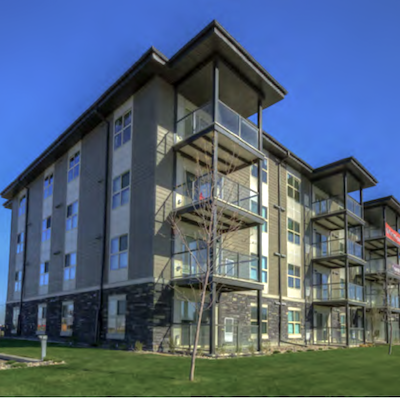 Parliament apartments in Regina is one of three new developments for sale as part of the Porchlight-Marwest multifamily portfolio. (Courtesy JLL)

More precisely, it knocks on the doors of 468 units at three new rental properties in Regina and Winnipeg, which make up the Porchlight-Marwest multifamily portfolio, which has been placed for sale by its owners.

“This is the opportunity to acquire immediate scale in two markets in Central Canada — assets that are new and high-quality – providing a higher yield than you’ll see in larger markets,” said Michael Betsalel, executive vice-president of JLL Capital Markets, multifamily investment in Toronto.

JLL and Winnipeg-based Capital Commercial Real Estate Services Inc. are marketing the three low-rise rental properties. They were developed by Porchlight Developments, based in Regina, alongside its key investor, Winnipeg’s Marwest Group of Companies.

For sale as a portfolio or individually, the properties offer roughly a five per cent capitalization rate, based on low-to-mid $200,000s cost per unit, says Betsalel. (Exact pricing, he adds, is available on request for prospective buyers.)

Based on data provided by CBRE’s Canadian Multi-Family Mid-year Update, the yield is slightly above the national average of 4.45 per cent for low-rise, class-A property. Additionally, the report notes conditions are ripe for the multifamily rental segment across Canada with rental rates near or at 10-year highs.

It further notes pent-up demand and a lack of investment opportunities have put upward pressure on pricing, resulting in the lowest cap rate among commercial asset classes.

Betsalel, however, suggests the approximate five per cent rate on the portfolio is a conservative estimate, given all properties are located in new, highly sought-after neighbourhoods.

This results in higher cash flows per newly rented unit, paired with market prices lower than many other major centres.

The largest asset in the portfolio is Parliament. Located in southwest Regina, it consists of three apartment blocks containing 241 units, averaging about 764 square feet per suite.

Betsalel adds most suites are two-bedroom units, and the asset includes a clubhouse with a fitness centre, lounge, party room, patio and pool table.

Two apartment blocks are fully rented and the third, completed this year, is mostly leased, he says.

Additionally the property is zoned and shovel-ready for a fourth building of 71 suites.

“There’s a variety of options that can be considered,” including the developer constructing the fourth building for the buyer, Betsalel says. 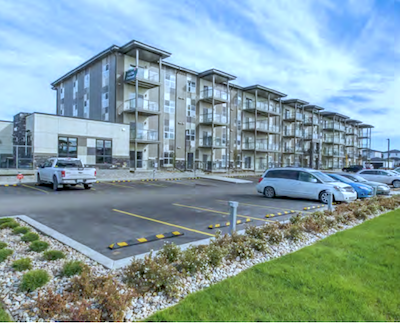 The Monogram apartments in Regina, part of the Porchlight-Marwest multifamily portfolio. (Courtesy JLL)

The other Regina property, Monogram, is located in the southeast and features 79 mostly two-bedroom units, averaging 713 square feet. The property is also fully rented and has a clubhouse with similar amenities to Parliament.

The Winnipeg property, Lumen, is a 148-townhouse development in city’s fast-growing southwest sector.

“They’re what we call ‘carriage homes’ so they’re like townhouses, but they’re back-to-back so there’s no backyard.”

The three-storey units average 1,053 square feet, and feature “a diverse tenant mix of a lot of empty-nesters and newcomer families.”

Betsalel adds all three properties are pre-underwritten by lenders, allowing for a higher loan-to-value leverage opportunity for potential buyers: “So a buyer could probably borrow 75 to 80 per cent loan to value.”

Additionally, the properties are in strong markets with typically low vacancies.

“Regina had a very soft rental market a couple of years ago,” he says, adding citywide vacancy was 7.7 per cent last year. Yet these Regina properties are located in areas with vacancies ranging from three to five per cent.

The average rental rate across the city increased by 1.5 per cent year-over-year, he says.

Winnipeg is arguably the stronger market, he notes. Its vacancy rate was 2.9 per cent in 2018 with year-over-year rental rates rising more than six per cent.

“These are stable, performing properties and because they’re new, they charge market rents.”

That said, the properties still have the potential for income growth. Since leasing began two years ago, rents have risen substantively on newly leased units, he said.

“So, new rents today are about 8.2 per cent on average higher than existing rents.”

What’s more. the multifamily projects are located in cities with modest but steady economic growth. Winnipeg’s real GDP growth is forecast to be 1.7 per cent this year, Conference Board of Canada data shows.

Regina’s real GDP growth is forecast to be 1.6 per cent this year, according to the board’s fall update.

Betsalel argues the Porchlight-Marwest multifamily portfolio has the potential to outperform other rental assets in these cities.

EDITOR’S NOTE: This story was updated with more recent per-unit pricing information for the portfolio, which was provided by JLL after the article was published.