The Library and Archives Canada Preservation Centre in Gatineau is one of the most unique public... 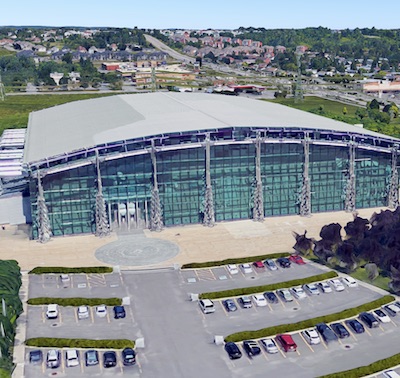 The Library and Archives Canada Preservation Centre in Gatineau is one of the most unique public sector buildings in the National Capital Region. A continuous series of upgrades to the quarter-million-square-foot structure has also helped earn it The Outstanding Building of the Year (TOBY) Award from BOMA Canada.

As a government building dedicated to protecting history, the LAC Preservation Centre was already distinct. From its foundation to its special exterior design, the building was very specialized in its construction to provide the protection necessary for the items it contains. Now, it is evolving with the times as new environmental and sustainability technology and initiatives become available.

“The Outstanding Building of the Year Award, it’s the most prestigious and comprehensive program of its kind,” said Scott Hamilton, director general of real property for Library and Archives Canada. “It recognizes technical expertise, quality of management and the fact that we have continued to invest and maintain this building over a 20-year period.”

The preservation centre was built between 1992 and 1996 before opening in 1997. It was constructed with the goal of preserving its contents to last for up to 500 years. The Preservation Centre contains 48 vaults which hold various relics including, but not limited to: 22 million books, 250 kilometres of archival records, 30 million photographs and 425,000 works of art.

The vaults are each individual spaces, essentially separate concrete rooms. The idea behind this design is to limit the possible damage in the event of a fire or other destructive event.

“Our role is to protect and preserve the treasures of Canada,” said Hamilton. “It’s important for us to have a building of this type where we keep all of the treasures when they’re being stored. It’s really important that the building provides the optimal temperature, humidity level, and consistency to the greatest extent possible.”

Protection against nature was also a major factor in the building’s construction.

The Preservation Centre was built atop 1,300 concrete piles driven into the bedrock to increase stability in the event of an earthquake.

The structure can also be considered a building within a building. The vaults and work spaces are housed within an interior structure encased by an exterior glass and steel frame envelope of 1,172 window panes, each about six by eight feet. This allows for maximum control over the amount of damaging elements which can get into the building.

Attention to building performance has continued long past its initial construction. It is constantly being upgraded to reflect breakthroughs in efficiency, leading to significant recognition by BOMA.

In addition to the TOBY Award, it also earned a BOMA Best Gold designation in 2017, and has a history of consistently being recognized for its quality.

“BOMA scores buildings on 10 different areas. You have to score between 80 and 89 per cent to get that gold certification,” explained Hamilton. “They’re looking at water, energy, air, comfort, health and wellness systems. Along with that, there’s custodial management, purchasing and waste management.”

As a 20-year-old building, replacing old equipment is another key part of becoming more efficient and sustainable.

The centre has also created major energy savings by replacing steam coils in the air units, as well as changing to LED lighting in the vaults. The latter conversion has the added benefit of being less harmful to the artifacts.

In a bid to better manage greenhouse gas emissions, large changes are on the horizon. LAC will build a second modern preservation centre, just north of the current site, and close an existing facility in Renfrew.

“We create a lot of greenhouse gas getting to it, and (the building itself is) not as efficient,” said Hamilton. The new centre will take about three years to build.

The Renfrew facility houses many heritage documents. By having the new facility also in Gatineau, emissions caused by transporting items between the two buildings will be cut.

The new centre is being built in conjunction with a private partner, which will also take over management of the current preservation centre. As part of its management agreement, the partner will be responsible for reducing current GHG emissions by 40 per cent by 2030.

“It’s not going to be 48 vaults. It’s going to be three vaults with an automatic storage and retrieval system using the latest technology to make sure that we can do things more effectively and efficiently,” said Hamilton. “My understanding is that this is going to be the first carbon net-zero building drafted by the Government of Canada.

“I think it’s going to be the first archival preservation building in North America to be carbon net-zero.”

As a Canadian TOBY Award winner, the centre is up for consideration at the International TOBY Awards, slated for June in Salt Lake City, Utah.

Hamilton likes the Preservation Centre’s chances of doing well, in part due to the nature of such buildings. By necessity, archival buildings must be very well-built to fulfill their purpose of protecting what are sometimes very fragile pieces of history.

These buildings must be capable of withstanding a variety of elements and threats, while doing so in an environmentally friendly and sustainable way.

“We’re putting in place equipment that’s using far less energy than what we used to use,” Hamilton said. “That kind of savings goes a long way if you think about every building in Ottawa making that kind of step.

“You can have some significant impacts.”