Prével has kicked off sales for the first phase of Esplanade Cartier, a residential project on on... 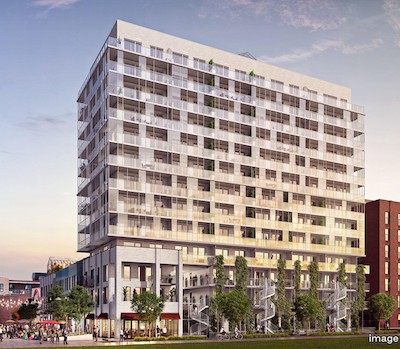 Prével has launched sales for Esplanade Cartier, a 14-storey condo tower which will be the first phase of a mixed-use development including retail and office space in Montreal. (Courtesy Prével)

Prével has kicked off sales for the first phase of Esplanade Cartier, a residential project on one of the largest sites still available for development near downtown Montreal.

It will see construction of an $85-million, 14-storey condo with 114 units on the northeast portion of the site, at Sainte-Catherine and Parthenais Streets.

Units will vary from about 400 to 1,200 square feet, with prices starting at just under $200,000. Prices are a bit less expensive than for other Prével condos in Griffintown or downtown, Prével co-president Laurence Vincent told RENX.

The aim is to revive a rundown area and bring people back to a neighbourhood “as we’ve done in the past,” Vincent said. Prével was a pioneer in condo development in Griffintown and has rejuvenated other once-neglected Montreal areas.

Construction should start early next year, with delivery in the fall of 2021. The entire site should be built over a five- to six-year period.

The ground floors of Esplanade Cartier will be primarily commercial with neighbourhood stores, such as food stores, cafés and restaurants.

“The vision is to create links and bring in people from outside the area, and to recreate the commercial strip that exists (further west) on Ste. Catherine and to bring it east of the Jacques Cartier Bridge,” Vincent said.

To create a more human scale, the section of the first phase fronting Ste. Catherine Street will be three storeys and the 14-storey tower will be set back from the street. In a nod to typical Montreal architecture, winding exterior staircases will provide access to some of the units.

“The architecture is modern, but well-anchored to the neighbourhood,” Vincent said. 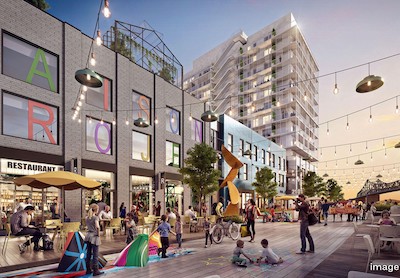 A project house and public square will be constructed as part of Prével’s Esplanade Cartier in Montreal. (Courtesy Prével)

There will also be a public square or “placette” on the site as well as a “maison du projet” or project house, a 3,000-square-foot neighbourhood meeting place with a rooftop greenhouse. “It’s something that’s often done in Europe, but hasn’t been seen much in Montreal until now,” Vincent said.

Prével is collaborating with Le Carrefour Alimentaire, a local organization that provides nutritional education and promotes healthy lifestyles, to provide programming at the project house.

The development will also feature a bike storage room in the lobby: “Through small gestures, like facilitating access to bikes from the ground floor, we can encourage good habits in which people prioritize active transport rather than cars.”

There will be one floor of underground parking in the first phase.

Prével is waiting for a go-ahead from the City of Montreal before it unveils its plans for the entire site. The borough is still working out the urban plan for the neighbourhood and Vincent expects development plans to be finalized by late next spring.

However, the rest of Esplanade Cartier will have a significant office space component.

Vincent said that will be important in revitalizing the area and ensuring the site is lively during the day and evening, and on weekdays and weekends. “It shouldn’t only be a bedroom community.”

Vincent said Esplanade Cartier will comply with Montreal’s proposed 20-20-20 bylaw that – should it go ahead – will require new residential developments to provide 20 per cent each of social, affordable and family housing. The bylaw has faced stiff opposition from developers.

“We’re waiting for the final regulations of the bylaw and we’ll adjust the project in consequence.”

Vincent says planned developments nearby at the CBC/Radio-Canada headquarters, Maison de Radio-Canada and at the Molson Brewery plant will be beneficial to the Prével project.

CBC/Radio-Canada will move into a new, smaller headquarters next door, which is currently being built by Broccolini.

Molson will vacate its Montreal plant on Notre Dame Street for a new facility on the South Shore.

Groupe Sélection, Montoni and the Fonds immobilier de solidarité FTQ acquired the Molson site and are planning a residential project based on the “live, work and play” theme, that will also  incorporate business, commercial and tourist aspects.

Vincent said Prével has been speaking with Groupe Sélection and Groupe Mach on a regular basis about their respective plans.

Prével is currently planning another residential project at a site now home to abandoned warehouses in the Tétreaultville area of the city, facing Parc de la Promenade Bellerive, Vincent said.

Prével is a family business founded in 1978 that has more than 100 employees. The company has built more than 11,000 housing units and says it is Montreal’s largest residential real estate developer.