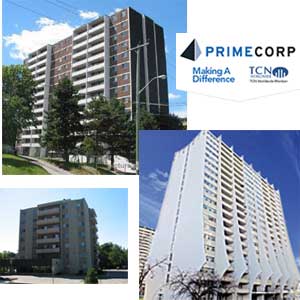 “We take these things to the market and try to generate as much interest as we can, and we were able to generate sufficient interest to be able to provide valuations that satisfied the owners,” said Primecorp chief operating officer, managing partner and broker of record Sam Firestone.

“It’s straight-forward marketing and bringing the best prospects to the table.”

Here’s a look at the recent multi-residential deals Primecorp has brokered:

This 20-storey apartment building has 159 suites with large balconies and was sold by NorthWest Value Partners to a private investor on March 17. More than two-thirds of the units have two bedrooms, while there are 21 one-bedroom and 21 three-bedroom suites along with five bachelors. It was designed by architect Uno Prii and built in 1968.

It has an enclosed yard for children, is located next to the Oakdale Golf and Country Club and is within walking distance of North York Sheridan Mall. A TTC stop is outside the door and Highway 401 isn’t far away.

This 13-storey building was also designed by Prii and built in 1972. It was sold by Northwest Value Partners to Medallion Corporation, which has three other neighbouring properties on Birchmount, on April 4.

More than 60 per cent of its 103 units have two bedrooms, while there are 27 one-bedroom and 12-three bedroom suites along with one bachelor. All have balconies. The building includes laundry facilities, an outdoor pool and a playground.

There’s 24-hour public transit service at the door, the Warden subway station isn’t far away, and the building is within walking distance of parks and schools. It’s close to Eglinton Town Centre, Eglinton Corners and a Smart Centre, and has easy access to Highway 401 and the Don Valley Parkway.

This property at 57 Union St. E. was sold by JTS Properties Inc. to Timbercreek Asset Management on Feb. 16. It features 10-storey and seven-storey apartment buildings that have a combined total of 32 one-bedroom and 65 two-bedroom units that are freshly painted and have large balconies.

This transaction included two mid-rise apartment buildings with a total of 82 suites that were sold by a private investor to Q Residential on April 15. They’re surrounded by parks and close to Lake Simcoe, downtown Barrie, public transit and Highway 400.

Each of Anne Street’s 42 suites has a private balcony and the building features a deluxe on-site laundry facility, covered and surface parking, a secure lobby/entry system and on-site management. The five-storey building was built in the 1980s and has five different unit sizes.

Private balconies are also included in each of the seven-storey Collier Terrace’s 40 one-and two-bedroom units, which were built in 1980. It includes a deluxe on-site laundry facility, ample surface parking, on-site management and a controlled access system.

This three-and-a-half-storey apartment in a quiet residential area with easy access to parks and trails near the Humber River was sold by a private investor to Starlight Investments on April 4. It has 15 one-bedroom and 18 two-bedroom units and is managed on-site by MetCap Living.

This three-and-a-half-storey brick building has eight units and local access to public transit, parks, restaurants, schools and shopping. It was also sold by a private investor to Starlight on April 4.

Other deals are pending, but Firestone couldn’t reveal any details.

“The supply does not meet the demand,” he said of the state of the multi-residential rental market.

“Interest rates are low so there’s still a strong appetite for quality assets. The challenge is trying to find opportunities for our investor clients.”

Primecorp became an affiliate member of TCN Worldwide last fall and Firestone believes the relationship has been very healthy for both parties.