One of Kamloops’ most prominent office buildings is for sale. Eleven-storey, 37,000-square-foot C... 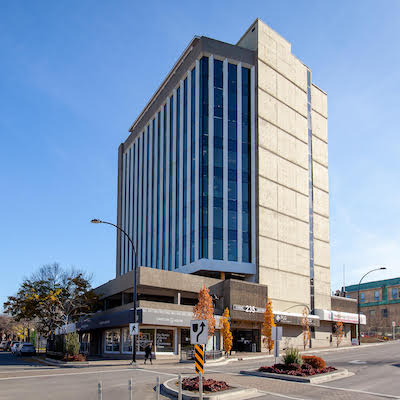 One of Kamloops’ most prominent office buildings is for sale.

The 1967-built tower is being sold by owners SRSN Ventures for an asking price of $6.3 million. The building is located at Victoria Street and 1st Avenue in a downtown cluster of retailers and office buildings.

Co-owner Brendan Shaw said he and his partner have owned the building, adjacent to City Hall and the B.C. Lottery Corporation (BCLC) headquarters, for nearly a decade.

“When we first picked it up, the occupancy was just over 50 per cent,” he told RENX in a phone interview. “We thought there was a bit of a value-add there, so we took it on and went from there.”

He said the market is much stronger now than 10 years ago. The building is 83 per cent leased and includes government and non-profit tenants, professional services firms, a law firm, two medical clinics and an advertising agency, Shaw said.

Kamloops, a city on the Thompson River in B.C.’s southern interior, has a population of about 90,000.

City planners are expecting an additional 7,900 residents in the next 20 years. Today, Kamloops is B.C.’s third-largest city outside of Metro Vancouver, behind only Victoria and Kelowna and just ahead of Nanaimo.

Cornerstone is one of roughly 15 downtown office buildings over 30,000 square feet, said Benjamin Temple, a senior associate with Avison Young in Vancouver, the listing agency for the sale.

“It’s one of the few buildings in Kamloops that’s above 10 storeys,” he said of the class-B tower. “There is not really a lot of class-A product, but it’s definitely up there in terms of the class-B buildings.”

He said the market has been quite active recently, presenting something of a sweet spot to sell the tower.

“Just in the last two years, the Aberdeen Mall was sold,” Temple said, noting the shopping centre located on the Trans-Canada Highway southeast of downtown traded for $83 million.

The Landsdowne Village Shopping Centre in downtown Kamloops also sold, for an estimated $45 million. “The price hasn’t been disclosed.”

About 18 months ago, an accounting firm left Cornerstone, leaving 25 per cent of the building vacant. Temple said Shaw’s company was able to replace most of that space without trouble.

“That speaks to the market in general, that they were able to fill that up pretty quickly,” he said.

Overall, demand for space is strong in downtown Kamloops, but rents haven’t yet reached a premium to spur much new development.

The market has a total office inventory of about two million square feet. Only about 55,000 square feet is vacant and Temple estimated the downtown vacancy rate at about three per cent.

“A good amount of that is class-C space that is second-storey walk-up; maybe doesn’t have an elevator,” he said.

“From what I understand, they’ve secured an anchor tenant and they’re supposed to start construction next year,” he said.

He said there is another 40,000-square-foot office project planned adjacent to TRU to the east of downtown, but construction has yet to start.

“There isn’t a lot of new supply and that’s why vacancy is quite low,” he said.